#Exvangelical: Is There Really Any Such a Thing? 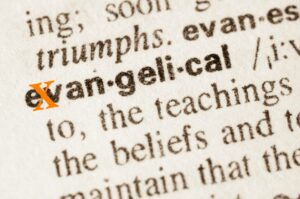 One of their own, Blake Chastain, coined the name: "Exvangelicals." It’s gained a certain cachet, usually with the hashtag: “#exvangelical.” In other contexts it’s "deconstruction," for the process of tearing one’s beliefs apart, then giving them up.

It’s become quite the fashion, and yet (if only!) I could almost be tempted to say there’s no such thing. I could almost justify it, even. Almost. In the end it’s wishful thinking. Evangelical Christianity has issues, and #exvangelicals are the fruit of it.

My “no such thing” temptation has a source: It comes from knowing how few, if any, of these #exvangelicals left a genuinely Christian belief behind. Alisa Childers, who knows "deconstruction" as well as anyone, said last week at a conference that in every "deconstruction" story she’s heard, the person’s beliefs had been distorted to start with. They’re not exiting Christianity, but a mixed-up version of it instead. Hence the temptation to say, “They couldn't be exvangelicals. They weren't evangelicals to begin with!”

But these people really thought they’d been evangelicals. Their churches, schools, and colleges carried the label -- even though they didn’t teach real Christianity, or at least not well enough to get through to these folks before “deconstruction” set in. I can’t shake that reality, and neither can I shake my sense of how tragic it is..

It Can Be So Good

It’s tragic, because first of all, the #exvangelicals haven’t just walked away from a culture, but from a Savior. They’re putting their eternities at great risk. And it’s also tragic because they’ve seen such a bad representation of such a good God.

It doesn’t have to be that way. I’ve seen it firsthand: Christianity can be very, very, very good. I’ve had it better than most, I'll admit. I spent most of my working years with the outstanding staff and volunteers with Campus Crusade for Christ (now "Cru").

You could call it the three H's: heresy, hypocrisy, and hushing.

I've had the privilege of knowing hundreds if not thousands of solid, humble, faith-filled followers of Christ. I've had close connections with dozens of great churches, and not just in the United States, but also in Russia, in Cuba, in Korea. I’ve known believers in China.

I’m witness to the fact that where evangelicalism is good, it’s good indeed. We're imperfect people (it hardly needs saying!), but we follow the greatest One of all, Jesus Christ. That's bound to have good effect on us.

It Can Be So Bad

I could wish it were always that way; that these #exvangelicals had only thought they’d been part of evangelical churches ,or wider evangelical culture. If they'd never been in it, they couldn't say they'd left it. But I can’t deny their testimony.

I went to a conservative Christian college, and much of the Christianity I experienced there was not consistent with the sort of understanding I had of the person of Jesus Christ. Free thinking was not always valued. The world was pushed to the side for something that was supposed to be an ideal approximation of it. A Stepford Wives version of Christianity that assumed the human impulses we all have toward sex, selfishness, and all the rest were simply not there.

What he's describing here isn't real Christianity, but unfortunately it's part of what everybody thinks of as evangelical culture.

This is similar to another question that's often raised: Could it be that they never had a personal relationship with Christ to begin with? That they're walking away from a faith they never genuinely had? That's an important issue, but not the one I'm after here. I'm talking about churches and church culture, not individuals' beliefs.

From what he’s written here, it would appear that free thinking wasn’t valued at Blake Chastain's church or Christian college. Now, I'm not naive enough to take that at face value. Too often "free thinking" often means, "Free to disagree with my church and my parents, and to conform unthinkingly to our culture's mood and social pressures."

So a person like Chastain can come out of Christianity thinking he's left behind a culture that's ignorant of "impulses" toward sex and selfishness. I take that to mean his church and college lived in denial. Maybe they were hypocrites, denying their own impulses. Maybe they were afraid to talk about it. Or maybe they were unwilling to let people ask questions about it.

Real Christianity is very aware of these impulses. We call it temptation. We're not so "free-thinking" as to believe doing wrong things can be right, but we sure ought to have freedom to think -- and then to explain -- why it's right to do right. Why it's good to do right. And we should be ready to say more than, "The Bible says so." That's a true answer, and sufficient for those who have confidence in Scripture's truth. For others, it's more likely to leave them thinking, "Then I don't like the Bible, either."

We could throw other questions into the mix: Is the Bible a book of legends? Does it contradict science? Haven't we progressed enough since then to be able to leave it behind? What about other religions? And so on.

Real Christianity is unafraid of questions, including these. Jesus Himself asked hundreds of them. We have answers, for those who will take the time to look. Why does the Bible say homosexuality is wrong? We can talk about that. For example (I’ve got full chapters on these things in my book Critical Conversations): Homosexual practice affects everything from the individual to children, from marriage culture to community culture. No society has ever survived any sudden increase in immorality. There are reasons for that, and no good reason to think ours should turn out any different.

Chastain's biography also hints strongly of an upbringing filled with "what to believe," but devoid of "why to believe it." I suspect it was also overrun with "how to behave so you look like one of us," also known as legalism, which has been Christians' favorite heresy since earliest days. Instead it should be about grace, the freedom to be who you are right now, while at the same time growing deep in relationship with Christ, and truth, letting Him shape you according to His will, through the Word and the Holy Spirit. That includes accepting His legitimate moral authority: He is God, after all.

Many Christians are crying to God for revival. Many say -- and rightly so -- that revival begins with us, with our own repentance. Most would jump quickly to saying we should live what we believe, but that covers only the second H. True repentance in the church must include all three.

We must give up our closed-off thinking, too. I do not mean we should be open to all answers; we want only true ones. But we must learn to be open to all questions, and to all true questioners, and to pursue the questions toward truth.

We must examine ourselves closely for legalism. We can’t just assume we’re free of it; our Christian heritage proves we have way too much affinity for it. And yes, we’d better live what we believe. It may be wishful thinking now, but we could dream of a day when true #exvangelicals are few and the label has no cachet remaining. Dream of it, pray for it, and seek the change in ourselves that can make it happen.

The post #Exvangelical: Is There Really Any Such a Thing? appeared first on The Stream.