Democrats Are Trashing the American Work Ethic With Their Spending Bill 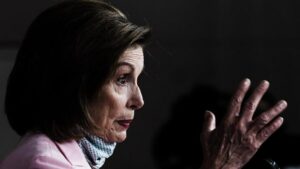 The humongous bill that Democrats in Washington, D.C. are assembling this week is a slap in the face to Americans who work, pay taxes, and support their families.

The bill demeans work ethic and glorifies government handouts. It sends a message that work and self-sufficiency are for suckers. Better to climb on Uncle Sam’s gravy train that will now provide cradle-to-grave benefits.

One Massive Bill With Freebies From Uncle Sam

The social spending bill will give monthly payments to almost all parents based on how many children they have, regardless if anyone in the family works. Democrats are also promising virtually free child care until kids reach age 5, free community college, and near the end of life, new Medicare and elder care benefits. The bill also includes 12 weeks paid leave each year for anyone who claims a family member needs care.

The bill demeans work ethic and glorifies government handouts. It sends a message that work and self-sufficiency are for suckers.

These freebies are rolled into one massive bill that is allegedly expected to run about 10,000 pages and, of course, will likely go unread by anyone, including your state’s representative.

Why are Democrats rushing? Under the U.S. Senate rules, they have only one shot to pass a bill before the end of the year with their slim majority. Democrats don’t have a mandate to transform America into a European-style welfare state, but they’re determined to ram the bill through anyway.

Democrats are also eyeing the 2022 midterm elections, which is when they could lose power. “Many of us feel that this is the biggest opportunity we will have,” explained Rep. Don Beyer, D-V.A. It’s vote buying on a grand scale.

The Nightmare in the Details

This bill pours money down a rathole. It allocates a whopping $45 billion to make community college free. Students won’t have to spend even $1 on tuition or fees, or pursue a course of study that prepares them for work.

Most students don’t finish community college within two years. Currently, 42% of community college students graduate within four years. A big reason is a lack of academic skills when they enter. Nothing in this program will change that.

One of the bill’s costliest items is paid family leave, with an estimated price tag of $225 billion over 10 years. It’s the mother of all family leave plans. Benefits are paid by the federal government based entirely on an employee’s word that a family member needs care. No doctor’s note or medical records required. Even the self-employed are eligible. It’s an invitation to big-time fraud, and a nightmare for small businesses that would have to hire a replacement on short notice and yet still keep the job open for the employee on leave.

The overall bill is being touted as a way to reduce poverty. House Speaker Nancy Pelosi brags that extending the monthly payments to parents will “cut child poverty in half.” Nonsense. Government entitlements don’t cut poverty or improve mobility for poor children -- a working parent does.

This bill lacks incentives to work. Sen. Joe Manchin, D-W.V., is urging a work requirement for parents to receive their monthly payments. His party should listen.

House and Senate committees are racing to finish drafting this gigantic bill, but what’s needed is public input. Most Americans don’t want to swap the American ideal of success through hard work for government paternalism, but that’s what the bill does.

The U.S. already has a generous social safety net, including federal programs to subsidize housing, food, child care, college, medical care, and even cellphones for the poor. Democrats are also trying to get green cards for 8 million illegal immigrants and make them eligible for the benefits of the bill.

Europe demonstrates the dismal results of a declining work ethic and ever-expanding government entitlements. Europeans have a lower gross domestic product per capita because they work fewer hours. They have to settle for smaller homes, fewer household appliances and conveniences, and a lower material standard of living.

Everything Europeans manage to buy is laden with hidden taxes to support their “caring” governments. Working-class Europeans are heavily burdened by these taxes.

That is the choice Americans face: Adopt European-style entitlements and the suffocating taxes to pay for them, as socialist Bernie Sanders wants to do, or work hard and have more spending money to buy what you and your family want.

Betsy McCaughey is a former lieutenant governor of New York and author of The Next Pandemic, available at Amazon.com. Follow her on Twitter @Betsy_McCaughey.

The post Democrats Are Trashing the American Work Ethic With Their Spending Bill appeared first on The Stream.