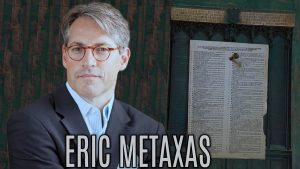 God grants us consolations at moments we really need them. When the witch's limitless winter in Narnia seems bleakest, most icy and sunless, we hear ... a report that a lion was sighted, on the borders of the kingdom. In the bowels of Cirith Ungol, as we hide from great famished Shelob, a vial of holy starlight still glows between Frodo's fingers. Even as we reeled from Biden's Benedict Arnold optioning of Afghanistan to the Taliban, and Dubya’s crass equation of patriots with jihadis, we received such a token of hope. My great-hearted, gifted, and eloquent friend Eric Metaxas is publishing a brand new book.

Or three books, depending on how you look at things. I purposely brought my ebook version to Kostas Cafe, the homey Greek restaurant where Eric and I have dinner when he's in town. The big-ticket item on the menu is the Athenian Combo. Order it and you won't just get two juicy lamb chops. You'll also get shrimp shimmering in garlicky scampi sauce. And alongside that you'll get a savory pile of pork souvlaki. It's three dinners in one -- all of them good, and each one almost worth the whole price of the combo.

Is Atheism Dead? is a great Athenian combo, though the Athens it evokes is more that of Socrates' city. This is Eric Metaxas turning his sharp eyes away from the contemporary scene, to explore the deeps of time, the expanses of space, the clay jars and rabbit holes of history, and how each field of knowledge speaks to us of eternal things.

Three Good Books in One

What Metaxas has written is in effect an instant trilogy. The first part explores in great detail, but never pedantic toil, the findings of key scientists in varied fields that touch on the question of God's existence. And frankly, all but prove it.

The second part reveals astonishing, little talked-about discoveries in biblical archaeology, confirming the Old and New Testaments as trustworthy chronicles of real-world history. Want proof that Exodus actually happened? It turns up here. Need to know the GPS coordinates for Sodom? Eric can show you the ashes, if not the receipts for the clean-up crews.

The third part of the book takes on the New Atheists, especially Christopher Hitchens and Richard Dawkins. Eric accepts their challenge to argue purely by reason, and purely on the merits. He finds their arguments thin, bitter gruel, clotted with logical fallacies, puerile evasions, and -- let's just admit it -- lies. Not white lies but damnable ones, in service of whitewashing brutal dictators and slandering the innocent.

I don't think most non-believers reject faith for intellectual reasons. (It has much more to do with peer pressure, sex, and sloth.) But most young people, especially, who abandon their childhood faith grab onto intellectual pretexts, to wield as clumsy brickbats in self-defense against the truth. How unintentionally comic, that 20-year-olds goaded by hormones latch onto despairing old myths crafted by Victorian-era windbags such as Darwin, Marx, or Freud -- none of them more convincing, in the end, than good old Norse mythology, which was good enough for the Vikings.

Eric doesn't just know the relevant books, but he knows most of the living authors, whose findings strip away the accumulated varnish of atheist materialism. You'll learn from Eric's book how the evidence and arguments are overwhelming that:

Our universe was designed with organic life in mind. Change just one of dozens of cosmic values by the itsiest, bitsiest wee percentage (pardon the jargon) and there'd be no planets. No carbon. No oxygen. No water. Or nothing outside black holes and empty space. Wistful atheist scientists are reluctantly turning to faith -- either in God, or unobservable fantasies like an infinite "multiverse." Our planet is special, perhaps unique. It sits in one of the only places in the universe where life seems even possible. Every factor, from the size of the moon to the weird freezing behavior of water, seems rigged in advance to craft a tiny oasis for organic life, in the vast deserts of space. Remember the "primordial soup" where random lightning bolts or volcanic heat turned inert chemicals into living cells? Yeah, that never happened. It could not possibly have happened, in all the time earth existed. Hundreds of millions of dollars and manhours, by the greatest biologist geniuses, have made zero progress toward the first building blocks of the most "primitive" living cell. (Which by the way, is more complex than mankind's most advanced computer.) But yeah, it emerged by total random chance, the same way wind and weather formed the faces on Mt. Rushmore. (Sorry, Cher!) Darwinian evolution, driven wholly by random mutations and the ruthless culling to find the "fittest," can explain why finches' beaks get a little longer. And little else. It founders on the massive eruption of dozens of whole new types of creatures in the Cambrian Explosion, and flops face first in the tar pits when we study the fossil record -- which looks nothing like what Darwin confidently predicted. It's not a matter of missing links; most everything is missing, and very little links.
Please Support The Stream: Equipping Christians to Think Clearly About the Political, Economic and Moral Issues of Our Day.

As a whole, the book is a warm and welcoming invitation to faith. The appeal here isn't so much to the heart as to the head. Metaxas takes on, like the heroes of that great old British TV show Danger UXB, the ticking time bombs which our Enemy has planted in various fields of human endeavor. He wades into their convoluted complexities and defuses them. That's the best an apologetics author, be it Thomas Aquinas or C.S. Lewis, can do: dismantle objections, disarm our defense mechanisms, and leave us squarely staring Truth in the face. No writer can make us kiss it.

But a learned, rigorous thinker can strip us of the last honest excuse. Then we're nice and culpable. We've been spotted in the Garden, our fig leaves have slipped away, and God can pose us His probing questions. We might still blame Eve, or the Serpent. But if we've read Metaxas, we can no longer blame Charles Darwin, or even Christopher Hitchens.

Is Atheism Dead will be published October 19, but is available for pre-order.