Our Wicked Rulers Could Learn from the Failures of King Saul 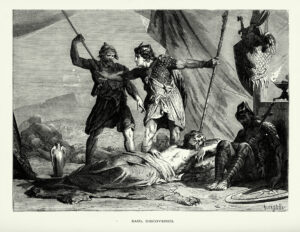 The new Taliban government’s make up was announced on September 11. (I'm sure they just picked that date out of a turban.) The appointments to top positions in the new government include four terrorists, who were released from Guantanamo Bay by the Obama/Biden administration in 2014. Then, Biden's disastrous pull-out of Afghanistan ultimately paved the way for these arch-enemies of the U.S. to rule Afghanistan. This is the same Afghanistan that was the hotbed of al-Qaeda Jihad training camps in which all nineteen 9/11 hijackers trained.

The four terrorists are: Wasiq (Intelligence), Noori (Borders and Tribal Affairs), Fazl (Deputy Defense Minister), and Khairkhah (Information and Culture). These individuals, plus Omari (who was appointed a governor in eastern Afghanistan last month) make up the "Taliban Five," whom Obama swapped for the traitor Bowe Bergdahl.

Bergdahl got captured by the Taliban after deserting his post in 2009. The late John McCain told CBS' Face The Nation that the Taliban Five were "the hardest of the hard core" and "the highest high-risk people." How could Obama swap five astronomically high-value assets for a traitor? Sheer stupidity doesn’t seem to cover such a decision.

What a Vet Has to Say

Republican Rep. Mike Waltz, a former Green Beret who served in Afghanistan, responded to the news:

I have deja vu knowing it's the same national security team in place now that then ‘exchanged’ such high-value terrorists for traitor Bowe Bergdahl. I personally led searches for Bergdahl and soldiers in other units lost their lives in search of him. Seeing these former Guantanamo prisoners now in charge of a terrorist state that will once again threaten the homeland is a slap in the face to every veteran, gold star family, and victims of 9/11.

To help "justify" his decision, at least through the eyes of public perception, then President Obama honored Bergdahl in the Rose Garden in May 2014. His Security Adviser Susan Rice maintained that Bergdahl served the Army with "honor and distinction." Susan Rice ... that sounds familiar. Oh yeah, she's the one who went on all the Sunday talk shows, saying the September 11, 2012 Benghazi attack on our Embassy was because of an obscure anti-Islam video.

Will the Taliban Be the Modern-Day Agag?

Criminal folly isn’t new. We see it throughout human history, and lots of it in the Bible.

King Saul completely botched God's plan in a military operation against the Amalekites, and he was impeached by God for it. God -- through Samuel -- had told Saul, "Kill both man and woman, infant and nursing child, ox and sheep, camel and donkey" (1 Samuel 15:3). That sounds awful to us, but God as the author of life has the right to demand it back from anyone. Or is He violating our rights if calls us home at any moment, via heart attack or catastrophe?

Saul's failure to deal with God’s enemies, the Amalekites, cost him the throne of Israel. Samuel told Saul, "Because you have rejected the word of the Lord (by going soft on King Agag), He also has rejected you from being king." (1 Samuel 15:23)

Could the Taliban be Biden's Amalekites? His weak stance with this barbarous enemy has disgraced our country, and he could pay the same price Saul did. And more importantly, we the people of the United States, could pay a price for decades -- if not generations -- to come.

Can We Love Our Neighbors but Not be a Pushover?

I would like to take a little "rabbit trail" here because many have a hard time squaring a God Who would say "Kill both man and woman, infant and nursing child" and also say "Love your neighbor as yourself" (Matthew 22:39). After all, wouldn't loving our neighbors as ourselves means always being a pushover to our enemies?

After revealing to the Pharisee the two greatest commandments, Jesus went on to say, "The entire law and all the demands of the prophets are based on these two commandments" (verse 40). One of those "prophets" was Samuel, who told Saul to completely destroy the entire Amalekite nation." How could there be love in that? If we follow the aftermath of that war through the Bible  -- and even to our world today -- we can see how.

The Reappearance of the Amalekites

Because Saul was disobedient and spared King Agag, Jewish history has it that Agag was the last man standing of the Amalekites and fathered a child before being killed (by Samuel). That disobedience by Saul kept the Amalekites' lineage going. The movie, One Night With the King, based on Tommy Tenney's book, Hadassah, portrayed this view. Others hold to the conjecture that some of the Amalekites escaped Saul. Either way, the Amalekites later reappear in Scripture in 1 Samuel 30 and 1 Chronicles 4.

In the reappearance in 1 Samuel 30, the Amalekites had burned Ziklag and carried off the women and children (verses 1-2). On God's command, David and his men went after them and recovered all (verses 18-20). They killed most of the Amalekites, except for 400 men who escaped on camels (verse 17).

Haman’s Hatred of the Jews

If we fast forward to the book of Esther, Haman, who was the Hitler of his day, contrived a plan to have all Jews in Persia annihilated. It is believed by some scholars that Haman was a descendant of King Agag. We read in Esther 3:1, "Haman, the son of Hammedatha the Agagite." Fortunately, Queen Esther intervened and thwarted his plan, and Haman and his sons were hanged on the gallows they built for the Jews. So, they were finally rid of the Amalekites and their descendants, right? I wish that were the case, but I'm not so sure. The book of Esther took place in present-day Iran, and their hatred of the Jews has carried on even unto this day.

Iranian leaders like Ahmadinejad repeatedly and publicly make statements such as, "The solution to the Middle East crisis is to destroy Israel," and "The Jews should be wiped off the face of the earth." The Mullahs in Iran still spew this type of hate toward Israel. Those comments sound like echoes from Haman. And Iran continues to support Israel's enemies such as Hamas and Hezbollah. My personal view is that some of these enemies of the Jews in Iran even today are descendants of Haman and the Amalekites who "slipped through the cracks." But one thing is for sure: that same evil spirit of anti-Semitism has passed down in the region. No wonder God told Samuel to completely destroy them.

Too bad we don't live in a "perfect world." We once had it before Adam and Eve squandered it, and we will have it again someday. But now, during this evil-filled interim, we're going to have enemies to deal with. We can try to love them (Matthew 5:44) and pray for them (Luke 6:28), but sometimes we must kill them or imprison them for the greater good of protecting our citizens. The "Peace through strength" policy has proven to be effective, as during the Trump years. The appeasement policy of Obama/Biden has proven to be a disaster.

The post Our Wicked Rulers Could Learn from the Failures of King Saul appeared first on The Stream.