‘We Suffered and Continue to Suffer’: Simone Biles Fights Back Tears While Testifying at Hearing on Larry Nassar Investigation 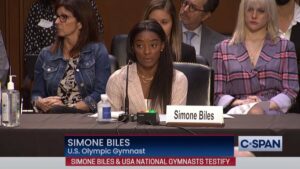 Two-time Olympic gymnast Simone Biles fought back tears as she testified before the Senate on the FBI's investigation into former Michigan State and Team USA gymnastics doctor Larry Nassar.

"I blame Larry Nassar and I also blame an entire system that enabled and perpetrated his abuse," Biles said. "If you allow a predator to harm children, the consequences will be swift and severe. Enough is enough."

"I don't want another young gymnast, Olympic athlete or any individual to experience the horror that I and hundreds of others have endured before, during and continuing to this day in the wake of the Larry Nassar abuse," she said.

Biles detailed how the abuse by Nassar affected her mental health during the Tokyo Olympic games, as the postponement from 2020 due to the pandemic meant she "would be going to the gym, to training, to therapy, living daily, among the reminders of this story for another 365 days."

The gold medalist said she "worked incredibly hard to make sure that my presence could maintain a connection between the failures and the competition," but it proved to be "an exceptionally difficult burden ... to carry, particularly when required to travel to Tokyo without the support of any of my family."

"We suffered and continue to suffer, because no one at the FBI, USAG or the USOPC did what was necessary to protect us," Biles said. "We have been failed."

Fellow Olympians Aly Raisman and McKayla Maroney also testified on Wednesday at the hearing meant to hold the FBI accountable for mishandling the allegations against Nassar.

"A survivor's healing is affected by the handling of their abuse. It disgusts me that we are still fighting for the most basic answers and accountability over six years later," Raisman said.

Maroney accused the FBI of making "false claims" about what she told the agency. "I thought, given the severity of the situation, they would act quickly for the sake of protecting other girls, but instead it took them 14 months to report anything, when Larry Nassar, in my opinion, should have been in jail that day," she said.

The post ‘We Suffered and Continue to Suffer’: Simone Biles Fights Back Tears While Testifying at Hearing on Larry Nassar Investigation appeared first on The Stream.