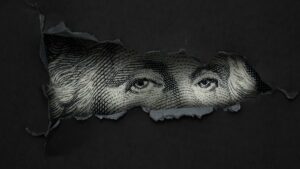 In May, the Treasury Department released the Biden administration's revenue proposals for fiscal year 2022. One aspect of this document that has gone under-reported is the administration’s new plan for reporting requirements for financial institutions.

The document is unequivocal about the administration's goal for financial reporting, stating, "this proposal would create a comprehensive financial account information reporting regime."

The Biden administration's goal here is to increase tax revenue by making sure no income avoids detection. How will the administration do this? It plans to leverage financial institutions like banks.

Financial institutions will report any flows in and out of business and personal accounts of more than $600.

"[T]his requirement would apply to all business and personal accounts from financial institutions," the proposal reads, "including bank, loan, and investment accounts, with the exception of accounts below a low de minimis gross flow threshold of $600 or fair market value of $600."

In other words, financial institutions will report any flows in and out of business and personal accounts of more than $600.

This reporting requirement is far above any current requirements on financial institutions. As the document itself states, currently only information for certain types of revenue (including 1099 forms MISC, NEC, and K) require reporting.

Some may view this proposal by the Biden administration positively. After all, this isn't an attempt at raising taxes. The goal of this policy is to ensure individuals pay what is legally required, isn't it?

There are two issues with this way of thinking.

Cutting Off Air to the Market

The first issue is highlighted by economist Ludwig von Mises's insight that "capitalism breathes through [the] loopholes." The great innovations and improvements in well-being made available through capitalism were not generated in a loophole-free system. Oftentimes, the most important innovations begin as small start-ups with razor thin margins. As loopholes close, the chance of these risky start-ups succeeding declines.

Entrepreneurs are not ignorant to the barriers of regulations and taxation. When something is taxed, you get less of it. If any entrepreneurs are right on the fence of whether a new business venture is likely to be worth it, increasing costs even a little bit may be enough to persuade them otherwise. Economists call this "being on the margin."

Avoiding taxes and reporting on small dollar transactions (either intentionally or unintentionally) is another form of loophole. De jure businesses are required to follow strict tax reporting rules, but, much like driving the speed limit, the de facto reporting often departs from the official rule.

To understand the danger of making businesses comply with tax law to the letter, consider how difficult it would be for businesses to do so. The tax code is now so long that nobody, including government officials, are sure of its length. How can business-owners be sure they're complying with a document of unknown length? Put simply, they can't.

Therefore, not only will these increased financial reporting requirements raise taxes on entrepreneurs on the margin, they will also force businesses to expend more time and resources ensuring they pay the proper amount of taxes. Any tax audit with access to every account transfer over $600 will crush businesses without a team of accountants or lawyers able to justify every transfer.

The burden of this policy, then, will fall primarily on small businesses without access to a massive internal legal team. A policy that punishes small businesses like this may be good for large corporations, but it's bad for market competition.

The second issue associated with Biden's proposal is its effect on financial privacy. The administration's focus on increasing financial reporting is becoming a consistent theme. For example, the "information reporting regime" document also includes proposals for cryptocurrency reporting which can be seen as a precursor to the crypto reporting requirements shoehorned into the "infrastructure" bill.

The increase in financial scrutiny provided by access to every transaction greater than $600 associated with personal accounts would provide an unprecedented look into the finances of many Americans. Even the powerful political will behind the 2002 "Patriot Act" only led to requirements that banks report suspicious transactions of $5,000 or more.

Much like small businesses, most individuals don't have access to a team of lawyers and accountants the same way D.C. politicians and bureaucrats do. As such, these new requirements are likely to hurt poor and middle income Americans whose primary source of income is non-traditional. This is unsurprising given the Biden administration’s record of threatening gig work, for instance.

Some may argue that privacy is unnecessary because you have nothing to fear if you have nothing to hide. But, again, individuals cannot be expected to perfectly comply with a document of unspecified length. Unfortunately, as the government approaches perfect information, perfect compliance becomes the standard.

At one time, perhaps community banks or other small financial institutions interested in keeping customers around could've provided resistance to this by generating political pushback or work-arounds for customers.

However, government policies have effectively destroyed a more decentralized network of financial institutions. Since the early 1990s the number of small banks has fallen from over 10,000 to below 5,000. Now politicians are proposing to leverage their relationships with the few big players who are "too big to fail" to examine every aspect of Americans' finances.

Especially with the lockdowns, the federal government already has small businesses, independent contractors, and the economy in general in a stranglehold. This new "Information Reporting Regime" will only tighten its economically lethal grip.

The post Treasury Department Seeks to Track Financial Transactions of Personal Bank Accounts Over $600 appeared first on The Stream.