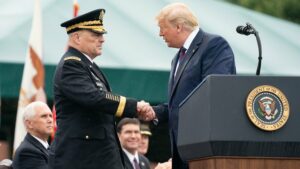 Is the biggest story in the nation Tuesday a bombshell revelation of treasonous behavior by the Chairman of the Joint Chiefs? Or just one of the biggest examples yet of fake news? As the Magic 8-Ball tells us, "Unclear, ask again later." Here's the story.

According to an upcoming book by Bob Woodward and Robert Costa of The Washington Post, Joint Chiefs Chairman Gen. Mark Milley was so concerned that then-President Trump, who was daring to call out China over its coronavirus cover-up, would launch a military attack on China that he took action to subvert Trump's command of the military.

All this hinges, of course, on two key words: "If true."

The book claims that Milley met with senior military officers to tell them that Trump could not launch nuclear weapons unless Milley was involved to okay it ... that he called his counterpart in the Chinese military to assure him that he would warn China in advance if the U.S. was going to attack ... and that he met with House Speaker Nancy Pelosi on January 8th (who, of course, agreed with him that Trump was mentally "unhinged" -- the term leftists use for anyone who disagrees with their disastrous policies) to discuss ways to block him from using his presidential powers.

The Pentagon claims this was just standard operating procedure, nothing to see here. And liberal media outlets are trying to paint Milley as a hero protecting our democracy from ... democracy, apparently. Incidentally, there's no need for Milley's "heroic" usurpation of power because there's already a constitutional way to deal with a president who is mentally incompetent for real. It's called the 25th Amendment. Democrats might want to bone up on it.

Conservative commentators, however, say that if true, this is a stunning incident of out-and-out treason: an unelected official staging a clandestine coup to usurp the powers of the duly-elected Commander-in-Chief and conspiring with our enemies against the U.S. President. It's the most shocking example yet (and we've seen a mountain of them recently) of entrenched deep state elites completely disregarding the elected representatives of the people and acting as if they have a divine right to rule.

Here's a hint as to how bad this is: even Alexander Vindman, who thought he should decide policy instead of Trump, says that if true, Milley "usurped civilian authority, broke Chain of Command, and violated the sacrosanct principle of civilian control over the military" and he "must resign." He called this a "dangerous precedent" that we can't simply walk away from.

All this hinges, of course, on two key words: "If true." Bob Woodward has a track record of making incendiary claims for which he offers no supporting evidence. Trump agrees that if it's true, it would be treason, but he also doubts the story. He called Woodward a writer of fiction, but he still called on Milley to resign because he believes Milley made up the story to deflect attention from this Administration's catastrophe in Afghanistan.

Trump also made the excellent point that it's ridiculous to think he would attack China, which never even occurred to him, noting that he's the only President in decades who didn't start a new war.

So where do we go from here? Obviously, we need a full investigation to determine whether this incredibly serious charge against the Joint Chiefs Chairman is credible. If he met with senior officers and Pelosi, then there should be plenty of witnesses and/or co-conspirators to call.

I suggest that Congress immediately convene a 9/11 style commission to investigate this allegation of what could be the most serious attempt at insurrection and the worst assault on our democracy since the Civil War! Since Nancy Pelosi has been accused of being a secret conspirator with Milley to overthrow the duly-elected President, she should probably be jailed (perhaps in solitary confinement) until such time as authorities decide whether to charge her with anything or not.

I know this sounds a tad harsh, but hey -- Speaker Pelosi did establish the precedent.