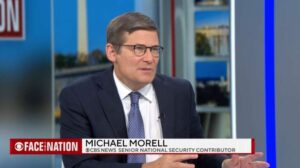 "I think that the Taliban winning the war in Afghanistan, and then the way our exit happened, has absolutely inspired jihadists all over the world," Morell said, Fox News reported.

Morell served as the acting director of the CIA twice during the Obama administration and was under consideration to return to the position by then-President-elect Joe Biden.

Morell told host Margaret Brennan it was likely Afghanistan would become "more dangerous than other spots on the planet" with the Taliban in charge. Morell also said he believed the lack of American military presence in the region put the U.S. "more at risk, without a doubt."

"We haven't yet put together a strategy ... to collect that intelligence ... and then the Department of Defense has to figure out this over the horizon capability," he said.

"The Taliban is saying, we just didn't defeat the United States, we defeated NATO. We defeated the world's greatest military power, ever. So there's a celebration going on," Morell continued.

The most important thing for Biden to do was "accept responsibility" and make whatever decisions are necessary to maintain the nation's security, former Defense Secretary Leon Panetta said on Fox News' Cavuto: Coast to Coast on Monday.

Panetta said it was essential that Biden "do whatever the h*** is necessary" to get U.S. personnel and Afghan allies who fought alongside the Americans out of Afghanistan.

Secretary of State Antony Blinken testified on Monday that about 100 Americans remaining in Afghanistan told the State Department they wished to leave the country. Blinken continued to say that "about 60" of those Americans were offered seats on planes that left the country last week, but only 30 were able to access the flights.