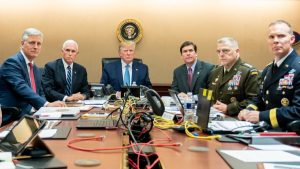 And it's a piping hot Brew for you today!

So much for civilian control of the military. And you want to talk insurrection?

Chairman of the Joint Chiefs of Staff Gen. Mark Milley rejected the chain of command in the final days of the Trump presidency. According to a new book by Bob Woodward, Milley told staffers to ignore any orders from President Trump regarding nuclear weapons, unless he was directly involved. To defy orders from their Commander-in-Chief.

Milley also made secret calls to his Chinese counterpart to say he would warn China if Trump launched an attack on the communist regime.

“If we're going to attack, I'm going to call you ahead of time. It's not going to be a surprise."

Now, what's that word for tipping off an enemy about a pending military attack? Seems to have slipped my mind. I think it begins with a "T."

Indeed, President Trump responded to the shocking story by telling Newsmax, “If it is actually true … that is treason.”

This is the same Milley who helped botch the Afghanistan withdrawal, the end result of which is China will likely have our air base and access to precious minerals. (Funny how much this guy bends over for China and goes out of his way to target Americans.)

The notion that Trump was going to do something irrational in his final days was part of the post-election propaganda pushed by Nancy Pelosi to deflect attention away from the election theft. And Milley played his part.

Milley went on to push Critical Race Theory on the armed forces, and claim he wanted to understand the (non-existant) "white rage" behind January 6.

What about that? The January 6 protesters believed our duly elected government was being stolen and sabotaged. Woodward's book detailing Milley's alleged actions against the President of the United States, working in cahoots with the Democratic machine, is further evidence they were 100% right.

Gotta hand it to her, she does clean up nice. Then she has to go and ruin it by stealing a graphic design from Chick-fil-A. Yes, we're talking about AOC and her "Tax the Rich" gown at Monday night's Met Gala.

AOC says wearing the dress was her "duty as a working class woman."  (Wait. I thought you cancelled the word “woman” last week. Is it back in fashion when you slip on a fancy gown and get all made-up?)

Naturally, AOC was mocked for dropping $30,000 a ticket to hang with New York and Hollywood elite, pretending to be of the people with her cheap political posturing.

But let's think about this stunt a bit. How bad did she misjudge the room?

How thrilled were her hosts at AOC urging the government to take away the very money that those rich could donate to the Met?

How thrilled were the wealthy Manhattan socialites at having some bartender from the Bronx crash their party wanting to steal their dough?

And how ticked were the other women that AOC would steal their thunder? You know Jennifer Lopez wanted to take a heel and plunk her a time or two.

By the way, where were the masks?

A federal judge in New York has granted an emergency injunction to block New York State's vaccine mandate. The mandate requires hospital staff and employees of long-term care facilities to be vaccinated in order to remain employed. Some 17 health care professionals sued, saying their religious beliefs compel them to refuse taking the COVID-19 vaccine. The New York mandate has no religious exemption.

barred from taking any action, disciplinary or otherwise, against the licensure, certification, residency, admitting privileges or other professional status or qualification of any of the plaintiffs on account of their seeking or having obtained a religious exemption from mandatory Covid-19 vaccination.

That's hardly the only lawsuit. Arizona on Tuesday became the first state to sue Biden over his vaccine mandate.

Meanwhile, Students at a Catholic university in Nebraska are suing their school for refusing to grant a religious exemption to its COVID-19 vaccine mandate. Creighton University decreed any student who didn't provide proof of vaccination would be "administratively withdrawn from school."

The students' suit accuses the school of “arbitrary and disparate treatment of students and violations of religious freedom.”

Finally, Denmark has dropped all its COVID restrictions and its vaccine passports.

Good news for those of you eager to see the terrorist state of Iran have nuclear weapons. According to The New York Times, Iran is now within a month of having enough enriched nuclear fuel for a single nuclear bomb.

Yes, that's the same Iran that is currently getting shipments of our weapons from the Taliban, and celebrated the 9/11 anniversary by sending drone bombs toward an Iraqi air base housing U.S. troops. (With, thus far, no reprisal.)

Iran's major Muslim rival in the region, Saudi Arabia can't be thrilled Iran is on the eve of a nuke. Especially on top of the news that the U.S. has pulled missile defense systems out of their country.

Biden Claims to Have Received First Job Offer from Idaho Lumber Company. They Have No Record Of It

Looks like Joe Biden might be making up his own biography ... again. During a stop in Idaho Monday, Biden claimed he received his "first job offer" from an Idaho lumber company called Boise Cascade Company. As Joe tells it, back in the early '70s, he and his first wife thought Idaho was beautiful and were considering a move west.

One problem: Boise Cascade Company says they have no record of Joe Biden ever applying for a job. Did they try under the name "The Big Guy"?

In fairness, it was 50 years ago, and the company acknowledges the record could be long gone.

But just think. Had Joe gone to Idaho, Jill Biden would never have become President.

It may read humorous, but Stream contributor William Briggs is dead serious about the incoherency (to say non-Biblical elements) of the "Joint Message for the Protection of Creation." Read his "The Pope, Ecumenical Patriarch and Archbishop of Canterbury Walk Into a Bar."