The Pope, Ecumenical Patriarch & Archbishop of Canterbury Walk Into a Bar 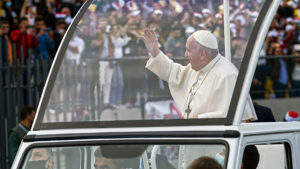 Guy called the Pope says, “I’ll have a Holy Water, with a twist.” Archbishop of Canterbury says “In the spirit of ecumenism, I’ll have the same.”

Ecumenical Patriarch says, “Those bubbles are made from CO2. Are you sure those drinks are sustainable?”

That’s a warm-up joke to lead us into the ones the Tittering Trio put out in their “Joint Message for the Protection of Creation.” Find it on the Vatican’s website -- which is optimized for Mosaic browsers.

The Message starts out with a real knee-slapper, “We realised that, in facing this worldwide calamity [of government and elite panic over the coroandoom], no one is safe until everyone is safe.”

It’s funny because since everyone can’t be safe, no one is safe. Ever.

That is hilarious because the old Christian message that being unsafe is an inherent part of the human condition has been transformed into an NGO-like Safety Firstism. And that never stops being funny.

Our frocked frolickers embedded that joke in a Hallmark card quip: “We realised that … what we do today affects what happens tomorrow.”

That isn’t as funny until you imagine they were out buying Pepto-Bismol when they wrote the line. (Think about it.)

Now I’m not saying the Archbishop of Canterbury is Bob Newhart or anything, but I laughed at (what could only be) his “we call on everyone, whatever their belief or worldview, to endeavour to listen to the cry of the earth.”

Anyway, it’s obvious the guy many call the Pope couldn’t resist tweaking the line, tacking on something about “pledging meaningful sacrifices for the sake of the earth.”

His thing for Pachamama hasn’t cooled yet.

They Must Have Hired a Discount Comedy Writer

It’s at this point I’m letting you, my audience, in on a secret about the comedy biz: Most comedians don’t write their own jokes.

Yes, some do. George Carlin, for example. Funny guy. Who’s not writing much lately.

All comedians write some of their own jokes, true. But ever since the advent of recording, repeating jokes gets old fast. The demand for novelty is therefore constant. Plus, coming up with new material isn’t easy, not when you have to work on your routine, it’s delivery, your character. So comedians farm out jokes for cash, and when they get them, they put their own spin on them.

It’s the same thing with our Tittering Trio. They wrote the opening, that’s clear. It works. It has laughs.

But they must have sought out a discount comedy writer to provide material for the rest of the Message. Because the rest stinks.

Listen: donations are down ever since priests chased parishioners out of Churches, ordering them to quiver at home until further notice. Money wasn’t around to pay for top writers.

How else you going to explain this groaner?

The current climate crisis speaks volumes about who we are and how we view and treat God's creation. We stand before a harsh justice: biodiversity loss, environmental degradation and climate change are the inevitable consequences of our actions, since we have greedily consumed more of the earth's resources than the planet can endure. But we also face a profound injustice: the people bearing the most catastrophic consequences of these abuses are the poorest on the planet. [Emphasis added.]

More resources already consumed than the world can endure? Which means it’s all over. It’s done. More than can be endured means no more can be endured. Get it?

Maybe you can work up a smile on this as you realize the rich are killing themselves too with global warming. Maybe you can think to yourself, “They won’t be able to afford enough air conditioners!” But if you could think of that, you ask yourself, “Why couldn’t they think of that?” When you go to a comedy show you expect the comedian to do the work, not you.

Would Anyone Chuckle at This Stuff?

Anyway, that dud’s followed by some one-world government, one-world religion riffs, but they go nowhere. One punchline runs into the next setup without a break. Even a participant in an after-hours Women’s Studies seminar wouldn’t chuckle at this stuff.

Worse, our clerical comedians couldn’t even be bothered to write their own finish. All we have is some prayer to something named “Glasgow” (mildly amusing name): “We pray for our leaders who will gather in Glasgow to decide the future of our planet and its people.”

Maybe “Glasgow” has some sort of magic wand or something, I don’t know. How else can it decide the future of the planet and its people?

I’m asking you. Sincerely. Did you laugh at that?

William M. Briggs is a senior contributor to The Stream, the author of Uncertainty and maintains an active and lively blog at wmbriggs.com. He earned his Ph.D. from Cornell University in statistics and studies the philosophy of science, the use and misuses of uncertainty, the corruption of science and the uselessness of most predictions. He began life as a cryptologist for the Air Force, slipped into weather and climate forecasting, and matured into an epistemologist.

The post The Pope, Ecumenical Patriarch & Archbishop of Canterbury Walk Into a Bar appeared first on The Stream.