Why Atheists Can’t Think Straight, Or Admit They’re Thinking at All 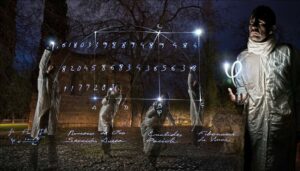 Atheist materialists assert -- with no evidence -- that matter is all there is. Since this is not true or certainly cannot be proven to be true, it would lead like all other semi-demi-hemi-truths to cul-de-sacs and trouble. For example, if matter is all that exists anywhere, then although human beings have brains, they do not have minds. This is a crucial distinction.

Materialists say there is a squishy wet piece of pink-gray matter inside our skulls and that is who we are. So when you die and it rots, there is no you left. There is no mind or soul apart from that mushy computer in your skull. This is conceivably true, but there is much evidence to the contrary, and it is certain that no one can prove it is true.

Nothing Beyond the Brain

Materialists -- and of course atheists, who are materialists -- know that the concept of Mind contradicts their belief that there is nothing transcendent, nothing beyond the material. So any hint that there is anything beyond our mere organic brains is out of bounds and too hysterical to be countenanced as even conceivably possible. So stories of people leaving their bodies during operations and watching themselves being operated upon -- which exist in the multiplied thousands -- must be hallucinations, even though these stories often involve the unconscious and anesthetized patient seeing things and knowing things going on during the operation that an unconscious anesthetized patient could not possibly see or know.

But these stories must all be rejected, even if they are the stories of brilliant and sober-minded persons, and even if the details of these stories are corroborated by doctors. For the atheist materialist, even to be open to the idea that it is possible some of those stories could be true is asking too much. They must be ruled out by definition.

The idea of consciousness must be waved away too. Somehow -- though no one can begin to point to how -- our mushy, squishy brains yield something we call "consciousness," where we are aware of ourselves and our surroundings in a way that a robot can never be, despite the fact that he might himself have a complex computer "brain" of circuits which materialists say is in no way any different from our brains, except less spongy and moist. But what is consciousness and how does a mere brain make that leap to consciousness apart from what we call "mind"?

No one has any idea. But materialists and atheists assure us that it doesn't matter. As with other impossibly tangled conundrums along such lines they either say A) we don't know yet, but for sure we will find out. We just know we will. And any evidence against our baseless but hopeful attitude is inherently wrong and must be dismissed, and harshly, too, for the sake of humanity. Or B) consciousness is an illusion. So let's forget all about it. There. We're done with the subject. What would you like for lunch?

Meat Robots of the World, Unite! You Have Nothing

Not that you really have a choice, since free will and consciousness are an illusion, and you are pre-programmed by your genes to choose some particular thing given the particular circumstances in which you now find yourself. You're what some have called a "meat robot."

But don't be depressed about that. It's only depressing if you think about it. Although if your genes have programmed you to think about it you really don't have a choice whether to think about it, do you? Perhaps you're one of those less-fit creatures whose survival ought to be curtailed. Perhaps it's just we who have evolved in the direction of not thinking about the bleak meaninglessness of "life" who should survive and perpetuate the species.

But why should "evolution" care about the perpetuation of a species that has no purpose and that cannot face the fact that it has no purpose? Again, we don't know. And if we want to know, it only makes the case that we aren't as fit as those who don't want to know. Get it? Good. Or not necessarily good, since good and evil are immaterial. But something like "good." Or perhaps not.

Perhaps even trying to make any sense of this goes against what we are, if we really are only matter that has mindlessly come to produce whatever it is that we are. And if that's true, what is there to say, really? If we are only matter, then nothing matters. Isn't that about the gist of it?

The above column is an excerpt from the author’s upcoming book Is Atheism Dead? Preorder it (and get the e-book) by going here, for deep discounts and signed copies of this and Eric’s other books. The section is reprinted here by permission of the author.

Eric Metaxas is the #1 NY Times bestselling author of Bonhoeffer, Martin Luther, If You Can Keep It, and most recently, Is Atheism Dead?

The post Why Atheists Can’t Think Straight, Or Admit They’re Thinking at All appeared first on The Stream.