What? I’m Very Rich? A Reminder That You Can’t Believe Everything You Read Online 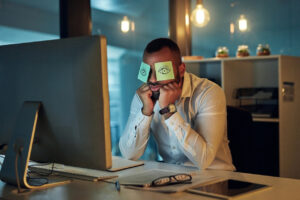 Over 15 years ago, a friend of mine was speaking with his mother about a controversial item in the news, disputing her understanding of the situation. She, for her part, was ready for the battle, citing a news source that confirmed her views. When he questioned the reliability of her source, she replied, "I know it's true. I read it online."

As laughable (and unfortunate) as those sentiments were back then, they are all the more laughable today. Yet millions, if not billions, of people regularly regurgitate the latest video they have seen online or the latest article they have read, as if the fact that it has been posted online somehow makes it true. Have we not learned our lesson by now?

It's true that many have learned to take the mainstream media with a very large grain of salt, branding their views "fake news." But has it dawned on these same people that many of the sites they rely on are equally biased, it not bogus?

A few months ago, a friend sent me the link to a website which had calculated my net worth at over 20 million dollars. We had a good laugh over it, and I thought to myself, "If I could just meet this guy, I would ask him to donate money to our ministry!"

Well today, while doing some online research on some Jewish-related subjects, I came across a website claiming to list the net worth of a well-known rabbi who is a personal friend. Could it be true? Was it accurate?

This, in turn, led me to search for a website claiming to list my net worth, assuming I would find the same one that was sent to me a few months back.

To my surprise, there were quite a few sites claiming to have this information, so I clicked on a few for amusement's sake. This one, by far, was the funniest, making me realize, for the umpteenth time, just how much nonsense is posted online.

Yet "sources" like this filter their way down into popular lore, and before long, you realize that your Wikipedia page has been updated accordingly and many people are citing this as gospel truth. "After all, it's on Wikipedia!"

To be clear, most of what I'm about to share with you is not on Wikipedia -- at least, not yet. But stranger things have happened.

I Am the Charismatic Movement?

So, according to the Information Cradle website, I am "an American radio host who was born and brought up in New York, New York," which is largely accurate. (I was born in New York City but raised on Long Island.) It then states that I am "author, apologist, and proponent of Messianic Judaism, Christian Zionism," which is borrowed verbatim from Wikipedia.

But then, whoever edited the cite, botched the bio (and butchered the Wikipedia entry), stating, "Likewise, he is the Charismatic Movement and the owner of The Line of Fire radio show."

Well, there you have it, and with all humility, I tell you today that I, yours truly, am the Charismatic Movement. That's right. This is not an international Christian movement with as many as 700 million believers worldwide. I myself am that movement.

As for my height (which over the years has been listed at 6' 3" but is closer to 6' 2"), "Brown stands at an average height" and "appears to be quite tall in stature in photos, relative to his surroundings." Talk about accurate, logical reporting! These folks are nailing it. Average height and quite tall at the same time. All clear.

As for my "weight and other bodily measurements," the sited claimed these were not available to the public, despite my widely publicized, oft-quoted story beginning in 2014, when I went from 275 lbs. down to 180 lbs. as a result of lifestyle transformation.

I Have a Husband?!

As for my parents -- this is where the reporting is absolutely astonishing in its accuracy -- I was born to Michael Brown, Sr., and Lesley McSpadden, which, coincidentally, were also the parents of Michael Brown, who was killed in Ferguson, MO in 2014 at the age of 18. What were the chances of a coincidence like this? Unreal! (For the record, my father was Abram Brown and my mother Rose G. Brown, may their memories be a blessing.)

As for siblings, there are none on public record (it looks like they missed my sister).

And then, the coup de grace, namely, information on my wife: "Brown has been married to her lovely husband, Nancy Gurian Conway Brown since 1977," after which it is mentioned that we have two daughters and four grandchildren.

Yes, Michael Brown has been married to her husband Nancy since 1977. (For the record, I've been married to Nancy, my wonderful wife, not husband, since 1976, and I'm a he, not a she. But why quibble.)

As for my net worth -- how encouraging to learn this! -- "Brown has an estimated Net Worth of $24 million as of 2021. This includes his Assets, Money, and Income. His primary source of income is his career as a radio host, author, and apologist. Through his various sources of income, Michael has been able to accumulate good fortune but prefers to live a modest lifestyle."

And there you have it. It must be true, since you read it online.

Dr. Michael Brown(www.askdrbrown.org) is the host of the nationally syndicated Line of Fire radio program. His latest book is Revival Or We Die: A Great Awakening Is Our Only Hope. Connect with him on Facebook, Twitter, or YouTube.

The post What? I’m Very Rich? A Reminder That You Can’t Believe Everything You Read Online appeared first on The Stream.