War Will Come to You 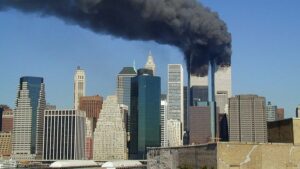 "What if they gave a war and nobody came?"

Back in the Vietnam era that question was on T-shirts and bumper stickers. Refuse to fight and -- Voila! -- peace will break out across the globe.

The question in its original form was a statement penned by Carl Sandburg in his poem The People, Yes:

The little girl saw her first troop parade and asked, 'What are those?' 'Soldiers.' 'What are soldiers?' 'They are for war. They fight and each tries to kill as many of the other side as he can.' The girl held still and studied. 'Do you know … I know something?' 'Yes, what is it you know?' 'Sometime they'll give a war and nobody will come.'

“Then War Will Come to You”

Sandburg's poem was published in 1936.

In Europe, Hitler had seized control of Germany three years earlier and was rapidly rearming in violation of the Treaty of Versailles. In 1936, German troops invaded and occupied the Rhineland, another flagrant violation of Versailles. Three years later, Hitler invaded Poland and World War II began.

Bavaria-born poet and playwright Bertolt Brecht was no fan of war. In fact, at age 17, with World War I raging, he was nearly expelled from school for writing an essay critical of Horace's famous dictum, Dulce et decorum est pro patria mori, "It is sweet and fitting to die for the homeland." Brecht avoided military service in that war, joining the medical corps instead. When Hitler rose to power, Brecht fled.

"What if they gave a war and nobody came?" Brecht is credited with a rejoinder: "Then the war will come to you." "When the people are disarmed," he wrote, "War will come."

Watching 9/11 Unfold From My Desk

In August 2001, I began a new job: Managing Editor of BreakPoint Chuck Colson's daily radio commentary. Because we often commented on the news, our office TV was on all day.

A passenger jet had just crashed into one of the World Trade Center towers in New York City. Everyone assumed that it was some bizarre accident until we watched the live coverage of a second passenger jet crashing into the second tower.

Later we sat mesmerized as both towers collapsed taking out nearby buildings, including one in which I had worked a few months earlier.

Meanwhile a third jet full of passengers crashed into the Pentagon and a fourth into a field in Pennsylvania probably on its way to either the Capitol or the White House.

It's difficult to grasp that this was 20 years ago.

The War on Terror

Terrorism! We'd seen it before. Islamic extremists bombed the World Trade Center in 1993. In 1995 a terrorist bomb killed 168 in a federal office building in Oklahoma City. Terrorists bombed the U.S. embassy in Kenya in 1998 and the USS Cole in 2000.

But 9/11 was different: unbelievably well-coordinated, huge in scope, using our own technology against us, and, most significantly, war came to us.

And so began "The War on Terror," a euphemism for war on terrorists. We would fight and we would win.

Afghanistan was home to the mastermind of the 9/11 attacks, Osama bin Laden. When the Taliban government refused to extradite bin Laden, a U.S. led coalition invaded to get bin Laden and end terrorist training in Afghanistan.

And now we're gone. The Taliban has returned to power. We left them lots of great military material. And terrorist training? While our intelligence agencies may know about that, we don't -- yet.

How much the world has changed in 20 years. Or perhaps it's more accurate to say that the world is the same; America changed.

Fr. Eric Banecker summed it up:

We are a demoralized society: Public morality is held up as a negative, and the idea that there is a common moral code either does not exist or exists in a warped way. People are just sick and tired of being sick and tired. They are beaten down by the Twitter wars and the real wars and the disintegration of our society. We see this in the deaths of despair, the rising suicide rate, people struggling with addiction, and the lack of trust in institutions, including the Church.

I can't imagine that the Taliban, ISIS, al Qaeda, and other terrorist organizations haven't noticed that "the steel of American resolve" as Mr. Bush put it isn't what it was 20 years ago.

Was the invasion of Afghanistan wise or foolish? At the time, it seemed wise and we've been free of major terrorist attacks since.

Was our withdrawal from Afghanistan wise or foolish? While the manner in which we withdrew was clearly foolish, time will tell.

And while I'm willing to give our leaders the benefit of the doubt, the answer to the question, "What if they gave a war and nobody came?" has always been "Then the war will come to you."

Dr. James Tonkowich, a senior contributor to The Stream, is a freelance writer, speaker and commentator on spirituality, religion and public life. He is the author of The Liberty Threat: The Attack on Religious Freedom in America Today and Pears, Grapes, and Dates: A Good Life After Mid-Life. Jim serves as Director of Distance Learning at Wyoming Catholic College and is host of the college's weekly podcast, "The After Dinner Scholar."

The post War Will Come to You appeared first on The Stream.