Does the Bible Limit Gender to Just Male and Female? 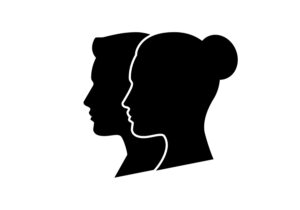 There's a trendy new idea that denies God created only two genders (male and female). What's the proof? Frogs. That's right. Proponents of this view claim frogs are evidence that the gender binary of the Bible is a myth. If you're puzzled by this, that's understandable. Here's how the argument works.

Defenders of this position point out that in Genesis 1, Scripture says God made creatures that live on the land and creatures that swim in the water. Frogs, however, are amphibians and aren't exclusively land or water creatures. They don't fit neatly in either of those creature classifications. So, although Genesis describes the creation of land and water creatures, it does not account for every kind of animal that God made.

In the same way, so the argument goes, even though Scripture says that God made humans "male and female" (Gen. 1:27), those two categories can't account for every kind of human. God also created non-binary people -- those who aren't either male or female.

Notice that no person -- Jew, Christian, atheist, or other -- for the last 3,500 years ever concluded that when God made mankind "male and female," that meant he also created people who were neither male nor female.

Now, there is some truth to what is being said. Many of the binary categories mentioned in the Genesis narrative don't fully account for everything that's created. For example, the Bible says God made day and night -- allegedly the only two categories during a 24-hour period -- but there's also sunrise, sunset, dusk, and dawn that are neither day nor night.

Notice, however, in those cases (land/sea creatures, night/day), Scripture later references some of the natural variations between these binary extremes. For example, the Bible mentions frogs over a dozen times, acknowledging the existence of animals that are neither land nor sea creatures. Scripture also references dawn and twilight, even though they don't fit the binary category of day and night.

This, however, is not the case with the binary category of male and female described in Genesis. There is never a later scriptural reference to another kind of human that falls outside the binary male-female gender category. If humans were made that were neither male nor female, why doesn't Scripture say so? Surely if God created non-binary people, he would consider them more important than frogs and mention them in his Word. But not a single sentence is spent referring to a person that's in between or outside the male-female binary.

Some might suggest that eunuchs should qualify as non-binary. Remember, though, that eunuchs were men who, according to Jesus, were either born that way, made that way by men, or chose celibacy (Matt. 19:12). Merely being born with a physical anomaly of your sex organ doesn't disqualify you from being male since your sex is determined by things like your DNA, whether your body produces sperm or eggs, etc. (This can be more complex, but it's outside the scope of this article). Getting castrated doesn't make a man any less male than a mastectomy makes a woman less female. Though sex-specific organs are removed in both cases, the changes are cosmetic and don't alter the core of a person. The Bible does reference such people, but it never uses their existence to challenge the gender binary taught in Genesis.

A Non-Binary Interpretation is Foreign to the Biblical Text

This whole attempt to force a non-binary interpretation into the Genesis creation account is anachronistic. Advocates of this view start with a modern theory of gender and then strain to impose that thinking on an ancient text. This is a common interpretive error known as eisegesis. It occurs when you start with your own idea and impose that meaning onto a text. The opposite and proper approach, however, is known as exegesis. That's where you draw out the meaning intended by the author that is found in the text. In other words, let the text speak for itself.

Notice that no person -- Jew, Christian, atheist, or other -- for the last 3,500 years ever concluded that when God made mankind "male and female," that meant he also created people who were neither male nor female. Why? Because it's utterly foreign to the text. This idea does not come from God or Scripture. It comes from people who rebel against God and Scripture (Rom. 1:18-23). It's a destructive anachronism that attempts to impose an alien meaning on God's Word.

Noah and the Ark

Finally, it's worth pointing out that when God destroyed the earth by the flood and "rebooted" humanity, he commanded Noah to preserve his wife, his sons, and his sons' wives. In addition, he commanded Noah, "You shall bring two of every kind into the ark, to keep them alive with you; they shall be male and female" (Gen. 6:18-19). When God chose to remake the world, he only preserved males and females because those two exhausted the gender categories of both humans and animals. The reason behind this decision seems consistent with the reason found in the initial creation of Genesis: The gender binary was directly tied to procreation. Only a male and female (no more and no less) are needed to be fruitful and multiply.

Nothing I've said here, however, negates our duty to love people who identify as non-binary. They are made in God's image and valuable like every other person. Many of them, though, are confused and desperately need our compassion.

Alan Shlemon is an author and speaker for Stand to Reason. He trains Christians to share their convictions in a persuasive, yet gracious manner. He has been a guest on both radio and television, and has spoken to thousands of adults and students across the country at churches, conferences, and college campuses.

The post Does the Bible Limit Gender to Just Male and Female? appeared first on The Stream.