Teaching 9/11 to the Emerging Generation 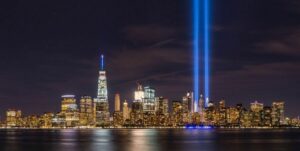 Like many of you, I remember exactly where I was on Tuesday, September 11, 2001. I was preparing to teach a class of college freshmen on the topic of Christian worldview. Obviously, my teaching plans for that day changed, but this was a tragic example of just how much worldviews matter.

I remember the chaos and confusion. I remember thinking this had changed our world forever, and it did. This was an event of national significance, as serious as the attack on Pearl Harbor or the assassination of JFK. Yet I've talked to so many parents and grandparents over the last several months who have realized that 9/11 is not really a significant part of the story of rising generations.

Instead, for them, it's distant history. Of course, the attack on Pearl Harbor, the Holocaust, the assassination of JFK and the moon landing are all history for my generation as well. But they weren't nearly as distant. These events were essential parts of our cultural memories.

We were still among those citizens who actually had a shared national memory. That's something that many in the emerging generation simply do not have.

I've been looking for resources to help teach the younger generation about 9/11. That's why I'm so excited that, this week, my friends at Drive Thru History released “9/11: A Drive Thru History Special.” You can watch it on the Drive Thru History YouTube channel. Or, you can see it Saturday at 1 p.m. Eastern on the Breakpoint Facebook page.

Many of you are familiar with Drive Thru History and the tremendous job that they do making history come to life. The 9/11 special is also hosted by Dave Stotts and provides a historical overview of that eventful day.

Through incredible video footage and narration, this special walks through the events of 9/11, highlighting stories of terrorism and heroism, introducing the perpetrators of great evil and incredible sacrifice.

The team over at Drive Thru History was kind enough to give us a sample of the premiere special that they aired for the public yesterday and this upcoming weekend. Here's a transcript of a segment of the video.

The September 11 strikes against America, often referred to as 9/11, were a series of four coordinated terrorist attacks by the Islamic group al-Qaeda. Four passenger airliners that had departed from airports in the northeastern United States were hijacked by 19 Islamic terrorists. Two of the planes were crashed into the north and south towers of the World Trade Center in New York City. A third plane was crashed into the US Pentagon in Arlington, Virginia. A fourth plane, heading towards Washington D. C., crashed into a Pennsylvania field after the passengers fought back against their hijackers.

According to scholars, 9/11 ended up being the single deadliest terrorist attack in human history. There were 2,977 killed, over 25,000 injured, and more than $10 billion dollars in property damage. It was also the single deadliest incident for U.S. emergency personnel, with 343 firefighters and 72 police officers killed that day in the tragic aftermath of 9/11.

It took 99 days for the New York City Fire Department to finally extinguish the smoldering fires at the World Trade Center complex. Then, it took another 160 days to finally declare the cleanup and recovery operation over. In the end, about two million tons of tangled steel and rubble were removed from the site.

Next came the process of healing and restoration through designing and building an appropriate structure to memorialize the event while functioning as meaningful office space for economic renewal in lower Manhattan. The iconic replacement was finally approved and constructed on the 16-acre site. One World Trade Center.

In the months after 9/11, we came together as Americans like I've never seen in my lifetime. First responders were applauded. Churches were packed. Radio stations played patriotic music. Sports stadiums honored the fallen. The military was revered. American flags flew on homes, schools and businesses everywhere.

Indeed, 9/11 was tragic, but I've never seen such American patriotism, unity, and resolve. While the country processed its grief, it also came together across religious, political, and ethnic divides. We were all just Americans.

Once a year on the anniversary of 9/11, a special tribute in light fills the Manhattan skyline. Two massive beams of light stretch toward the heavens symbolizing the fallen twin towers. It's a profound way to remember the day we will never forget.

The post Teaching 9/11 to the Emerging Generation appeared first on The Stream.