Ralph Northam Chops Up Robert E. Lee Just Like an Unborn Black Baby, the Taliban Does a Victory Dance, and Obadiah Still Can’t Get Rid of Karen 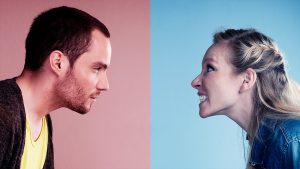 The Stream is running a series of fanciful political dialogues between a white female Democrat, "Karen," a Manhattan native, and a white male Republican from Lubbock, Texas, "Obadiah." Since Obadiah has been banned from Twitter and Facebook thanks to Karen's complaints, the exchange takes place on Gab.com -- a free speech platform which Karen has joined with the intent of monitoring it for "hate speech."

KAREN: Here you are again, preaching to the choir. I hope you realize how marginalized and isolated both you and your audience are, here on this anti-Semitic hate platform.

OBADIAH: Not so isolated but that I have to hear from you. It's like being downwind from a Port-A-Potty at the State Fair. On the day when they're serving tainted Mexican food. And it's 110 degrees in the shade.

KAREN: Leave it to you to start off on a note of xenophobia. But at least you're noticing the effects of climate change.

OBADIAH: The climate in America has certainly changed, I'll grant you that. Stolen elections have consequences.

Has Israel Accepted the Mark of the Beast? Goshdarnit …

KAREN: And there we go with the conspiracy theory. You feel some deep compulsion to check off boxes, don't you? Next you'll be saying that the Vaccine causes sterility and miscarriages, and that it's being forced on good ‘Mericans by the Joooooz... .

OBADIAH: Oh, that's one theory I'm certain is false. The fact that your Dead Baby Vaccine is most eagerly embraced in Israel proves that wrong. More likely, it's the Mark of the Beast, and we all know what end times prophecy says will happen next. By the way, I still haven't gotten it on my right hand or my forehead. So I can't work for any of the federal agencies of the Bidenist Occupational Government. Or buy and sell in the marketplace in cities like New York.

KAREN: You're just proud to be a menace to public health, as part of your pro-life witness, then?

OBADIAH: Keep this harassment up, and I might just add to the gun violence "epidemic," too.

KAREN: Too bad that on this platform threats of misogynistic violence aren't grounds for suspension.

OBADIAH: That wasn't a real threat, and for all I know you're not a real woman either. You're probably a federal agent with a beard, breasts, and a wiener, trolling to entrap some patriot into a crime. Go take your steroids elsewhere, sister. I'm not biting.

KAREN: Oh, feeling a little bit down because your precious military industrial complex got a black eye over there?

OBADIAH: I never supported bombing Hellholistan until it turned into San Francisco. We should have killed Bin Laden and left the place to rot, as far as I'm concerned. But Georgie Boy Bush wanted to play "Risk" with real American soldiers. And help Cheney's defense industry buddies coat their doghouses in 24-karat gold. So there we stayed. Muslims gonna Muslim, whatever you try to do. Just leave them to do it ... over there. Not here.

KAREN: And the Islamophobia emerges, right on cue.

OBADIAH: I'm not half as phobic of Islam as I am of the Woke creed you creeps are cobbling together like a cargo cult from our ruins. Though given what happened to General Lee, I'll say that you're every bit as good at destroying historic statues.

KAREN: Did that break your white racist heart, seeing Lee cut up into pieces?

OBADIAH: Governor Northam just did to Lee what he does to black babies in the womb every day -- so long as he knows they're "comfortable" and can't fight back. You people certainly do like targeting folks who can’t defend themselves. Jumping up and down on causes as lost as state sovereignty, or fetuses in the ghetto. But when it comes to Chinese genocide happening right now? Or the murder epidemic in cities you're running, like Chicago? If you can't pin it on the white Christian devils you want to dispossess and persecute like Tutsi cockroaches, you just get bored.

KAREN: Of course, the whole notion of pursuing Justice seems merely academic to you, since you enjoy historic race and gender Privilege.

OBADIAH: I don't get where a Darwinist like you can even mention the J-word. You think we're all jumped-up apes who emerged as a side-effect of meaningless DNA scrambling. When we die, we just wink out like a match in Bruce Jenner’s urinal. Where does Justice come in, from the Justice League? Does it land here like Superman? At least your prophet Darwin was consistent. He favored the "higher" races exterminating the others. Why do you borrow human dignity from a Bible you otherwise hold in contempt?

An 800-Foot Statue of the Greatest Slave-Trader in History

KAREN: Historically disadvantaged peoples have found in religious texts some powerful arguments and inspiration. The Bible, The Prophet, The Holy Q'uran ... .

OBADIAH: The Q'uran was dictated by a warlord who took thousands of women as sex slaves. The rapists of ISIS literally followed his example, word for word. The Q'uran is like an 800-foot statue of the greatest slave-trader in history, whose followers made slavery the central industry of whole countries in North Africa. But I don't see you seeking the Robert E. Lee treatment for Muhammad. And why? Because he has folks who will fight for him. And you like to pick on the weak. It's what Oligarchies do.

OBADIAH: You won't last long in the Max Max hellscape your types are creating around the world. Mouthy scolds in Anne Taylor skirts weren’t thriving in Kabul or Beijing, last time I checked. Trannies are woefully underrepresented in the Venezuelan junta. Woke white guilt is a luxury item for a certain type of pervert. It will no more exist in the future than whale-bone corsets, or reliable electrical grids. Your windmills and Teslas will go as dark as your abortion clinics. And what rises, if anything does, will look more like the Crusades than the George Floyd riots. Enjoy them. I will.

OBADIAH goes offline, and drives to a range to fire off the last few rounds of Russian steel ammo he was able to buy before Biden's ban. He feels better afterward.

The post Ralph Northam Chops Up Robert E. Lee Just Like an Unborn Black Baby, the Taliban Does a Victory Dance, and Obadiah Still Can’t Get Rid of Karen appeared first on The Stream.