‘See You in Court’: Republican States Say They are Reviewing All Legal Options on Biden Vaccine Mandate 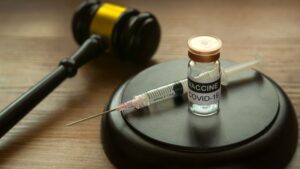 Several state attorneys general quickly condemned the president's actions Thursday and warned they would take the Biden administration to court to defend individual liberties. Arizona, Montana, Indiana, Arkansas, Missouri, Georgia and South Carolina were all among the states that threatened legal action in response to the White House announcement.

"I am reviewing his outrageous actions and will take all legal recourse to defend our state's sovereignty and the rights of Arizonans to make the best healthcare decisions for themselves," he continued.

On Thursday, Biden unveiled a series of steps that the federal government will take to increase the rate of coronavirus vaccinations nationwide. The president authorized the Occupational Safety and Health Administration to develop a rule mandating "all employers with 100 or more employees to ensure their workforce is fully vaccinated or require any workers who remain unvaccinated to produce a negative test result on at least a weekly basis," according to his announcement.

My legal team is standing by ready to file our lawsuit the minute @joebiden files his unconstitutional rule. This gross example of federal intrusion will not stand.

"Attorney General Knudsen will be exploring all possible legal avenues to protect businesses and hard-working Montanans from this lawless mandate which infringes on our rights," spokesperson Emilee Cantrell told the DCNF in a statement.

"Biden's historic overreach on vaccine mandates will not stand in Missouri," Missouri Attorney General Eric Schmitt tweeted. "We're at a crossroads in America -- who we are and what we're going to be. We must fight back."

"(Biden) see you in court," Noem tweeted shortly after the president's remarks.

The post ‘See You in Court’: Republican States Say They are Reviewing All Legal Options on Biden Vaccine Mandate appeared first on The Stream.