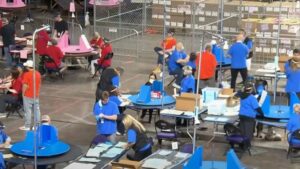 It's been ages since we've heard anything about the audit that's been taking place in Maricopa County, Arizona. That's the Phoenix area, one of the largest counties in the United States. (Keep in mind that Biden "won" the entire state of Arizona with only a 10,457-vote margin.) We're still waiting for results of the official audit -- as we've reported, the auditors have run into snags in getting material they say they need to complete their work -- but canvassing efforts by a separate group have apparently been completed and what they reveal is stunning.

The Election Summary proposes a solution with which we wholeheartedly agree: Ban Vote-by-Mail.

Of course, few news outlets will report this at all; we've gone to Joe Hoft at The Gateway Pundit for his story. The headline from Wednesday says "Election Steal is Now Confirmed." Let me make it clear, that's their headline, not ours, but we are eager to take a look at what the results of this canvass tell us, and then we can all make up our own minds.

Again, this is not the official Maricopa County audit report, which is still going on and has no hard-and-fast deadline. It's an independent effort conducted by Liz Harris and a group of volunteers, a "separate exercise" sponsored by the Arizona State Senate Republicans. That alone will give the Democrats the excuse they desperately need to dismiss this canvassing as partisan. But the methodology is transparent; volunteers went door to door, verifying the registration and voting information of thousands of voters, who make up a large statistical sample.

And Democrats who scream "Partisanship!" need to understand something: this, I'm sure, is documented right down the line and can be verified for you, every bit of it. (You, on the other hand, still work tirelessly to avoid election transparency.) So read it and weep.

Liz Harris tweeted this morning, "For all of those who knew the election was stolen, those who were ridiculed or labeled conspiracy theorists, you have been vindicated."

First, let's look at "lost votes." These are votes that were discarded and never counted even though people actually cast them. They were cast, primarily by mail, by American citizens living in Maricopa County, and yet there is no record of them at all. This canvass brought to light 173,104 lost votes.

Then, there are "ghost votes." These are votes cast by someone other than the voter who was assigned that ballot. The example everyone knows is a vote cast for someone who is dead and should have been dropped off the voter rolls. Someone else had to cast that vote, but who? The number of ghost votes uncovered in this canvas was 96,389.

There were other irregularities as well, though not as many, including votes cast from addresses that turned out to be vacant lots and votes recorded from people who it turned out hadn't actually voted. And when they went door to door to gather data on 2,897 mail-in voters, 98 of those people said they'd actually voted in person.

A Stunning Conclusion From the Election Summary

According to their Election Summary, "Two primary categories of ineligible ballots and election mishandling, encompassing hundreds of thousands of votes, render the 2020 General Election in Maricopa County uncertifiable."

The report talked as well about smaller, local elections that would have been impacted by this sort of inaccuracy. Ironically, those include the Maricopa County Board of Supervisors (which oversees elections, haha), which, in District 1, was decided by a mere 403 votes. Their election for U.S. Senate was decided by 78,886 votes, still well within the margin here.

The Election Summary proposes a solution with which we wholeheartedly agree: Ban Vote-by-Mail. "The U.S. Mail is not meant to be a secure transactional system," they say. This is why we don't send cash through the mail. How much is your vote worth to you? With that in mind, do you really want to send it through the mail, knowing all the things that can happen to it? They mention that "most first-world democracies, such as Germany, either ban Vote-by-Mail outright or place very heavy restrictions on its use."

They also provide some historical perspective: "Until the late 1800s, all votes in all states were public information." Our country went to secret ballot to stop a tremendous problem with voter fraud. (Before then, many people had been paid to vote a certain way, and it could be checked.) History is repeating itself now with mail-in balloting, "and again we have ridiculous and frivolous arguments being put forth against common-sense legislation to secure the rights of honest American citizens to vote and have their vote count."

For more details on why and how this canvass was conducted, be sure and go to the link provided above and read "Canvass Overview." All the issues they uncovered impacted an estimated 5.18 percent of mail-in votes, or about 88,215.

In a presidential election where statewide the margin of "victory" was only a little over 10,000, it's clear that reforms are necessary if we're ever going to trust our system again. (In such a close race, with these discrepancies, I don't think I need to tell you what the real outcome in Arizona likely was.) But, when Texas addresses the same issues with solid legislation, the bill is condemned by the left as racist and "anti-democracy."

It is nothing of the sort. (I would say that "anti-democracy" should apply to any policy that makes cheating easier or less detectable, because cheating causes real disenfranchisement.) Here’s what is really in the new Texas law, just signed into law by Gov. Greg Abbot.

This is all totally common sense, to make the voting process easier to monitor.

Of course, the new law will face legal challenges, but it should be looking pretty good when it gets to the Supreme Court. Let's hope more states follow Texas' lead and adopt election integrity legislation, not be bullied out of it.