40 Days for Life Remembers Dr. Noreen Johnson, Former Abortionist Who Gave Her Life to Christ and Became a Voice for the Unborn 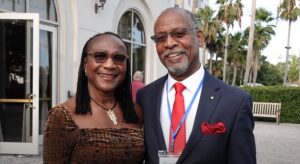 40 Days for Life’s president and CEO Shawn Carney first met Johnson and Robinson nearly 20 years ago at a prayer vigil outside of a Planned Parenthood facility.

“Haywood and Noreen have had such a huge impact on the pro-life movement at large,” Carney shared on a video post, “Unapologetically sharing their testimony of doing abortions, defending the unborn, holding medicine accountable for abortion, but more importantly, witnessing the beautiful mercy of Jesus Christ. … [Noreen’s] life represented the beauty and the victory that Jesus Christ had on the cross, and she unapologetically shared that … with great enthusiasm, great joy and a great sense of humor.” Carney said that Noreen would be dearly missed.

Carney asked for prayers for Robinson and their daughters as they mourn her loss and to “honor Noreen’s life by doing what she did, which was always speak up for those who cannot speak for themselves.”

Watch Noreen tell her story (after Carney’s message honoring her):

The post 40 Days for Life Remembers Dr. Noreen Johnson, Former Abortionist Who Gave Her Life to Christ and Became a Voice for the Unborn appeared first on The Stream.