So, Let’s Talk About Impeachment 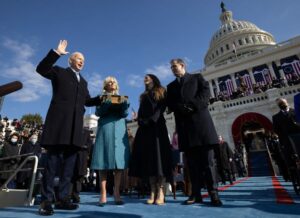 At this point, we've been through all the reasons President Biden is unfit to serve. Here's some welcome news: after the debacle in Afghanistan (no matter how much lipstick Biden's strategists try to put on that pig), a new Rasmussen poll of likely voters shows that 52 percent believe Biden should resign over his disastrous handling of the withdrawal. They see he's simply not capable. And the world sees that, too.

The More We See Joe Biden …

There's a song that gets played at weddings a lot; it goes, "The more I see you…the more I want you." The "Biden" version is more appropriate for a divorce: "The more we see him…the less we want him." One way his campaign experts got people to vote for the man was essentially to hide him until after those votes had been cast (well, counted). Why, he was "Mr. Moderate," so much more measured and likable than Trump, they said. It's much easier to like an unlikable person when you hardly ever see him.

On at least one thing, Barack Obama was right: "Elections have consequences."

And now that he has to take center stage occasionally, we can hardly believe what we see. I've always thought his political views were as wrongheaded as could be, but now something really is wrong with his head. Biden seems like the empty husk of a man, and perhaps that's what he really is.

Our Sense of Security is Being Shaken

This is not a partisan thing, but a national tragedy. If we're honest with ourselves, we all know. And the Afghanistan disaster has brought home to us all what a huge job it is to be President of the United States. It's the biggest job there is, and mistakes and lapses in judgment get people killed. Mistakes also upset the critical balance of power around the world that since World War II has allowed us the assumption that we would always live in freedom. That sense of security is being shaken now.

A take-down can also come from within, which naturally makes us curious about some who support a clearly unfit President. We also wonder who all those Afghans were who got airlifted to America. Apparently, about 110,000 are not the ones who were helping our soldiers. Is our President as clueless about this as he seems to be about most things?

The Constitution provides a few ways to remove a President who isn't fit to serve. There's the 25th Amendment, which may be invoked by Cabinet members if and when the decision has been made to put Kamala Harris in the Oval Office. (Shudder. That's the downside to unseating Biden.)

There's impeachment in the House, of course; we have more than enough familiarity with that process, though we've never witnessed conviction in the Senate, which would also be required. No matter how much Republicans in the House or Senate talk about it, it's empty chatter unless the GOP takes control of the House in 2022 and then there are enough Republican members courageous enough to actually push it. And even if the Senate were to flip to the GOP in 2022, it's highly doubtful there would be two-thirds of the members willing to vote to convict.

We do have guys like Romney there, who voted to impeach Trump, but would never likely vote a Democrat out. Heck, he might not be invited back on MSNBC if he did that!

Or, the President could be forced to resign. I'm sure there are powerful inducements. Make him an offer he can't refuse.

Unfortunately, there's no way to have a "do-over" -- even if fraud is proven -- or a recall election as they're currently doing for the California governorship. The framers of our Constitution apparently didn't think about what to do if a President who's spectacularly unfit to serve is still supported as a political puppet by those who are charged with unseating him. I guess they figured that at that point, only another revolution would suffice. Truly, I can hear Thomas Jefferson saying that very thing.

Dan Bongino, in his Wednesday podcast, made the case that we simply must immediately impeach President Biden, period. He called the people keeping him in office "disgusting filth." The final straw for him was the Reuters story that broke Tuesday about Biden pressuring the Afghan president to lie about the situation on the ground there in exchange for continued air support. He wanted Americans and the rest of the world to hear a positive report, "whether it is true or not."

This act on Biden's part is just obscene in two ways: 1) it's deeply dishonest, and 2) it's a quid pro quo, the very thing Democrats impeached Trump for even though that allegation was false. In Biden's case, the official transcript of the call proves he did it. As Bongino correctly noted, if Republican leaders discovered a Republican President had done this, they would push for impeachment themselves. (Or, I would add, they’d pressure him to resign, as the GOP did with Nixon.)

Watch how White House press secretary Jen Psaki deflects a question about this during her Wednesday briefing. She never addresses it, ignoring what Biden asked the Afghan president to do and talking instead about the "crisis of leadership" in Afghanistan. We need to be concerned about our own crisis of leadership.

Bongino warned that Democrats might assess Biden harshly right now, but it's because they know his actions were so bad they have to say something critical now to protect their reputations later. They aren't serious and will still cover for him. "Just give it a couple weeks," Bongino said. "The Democrats' story will change completely. They'll focus on...'the successful airlift.'"

Heck, they won't even allow questions to Biden about Afghanistan. They're very protective…

Blood on Your Hands, Joe Biden

Mark Levin was unsparing towards Biden and his top generals on Wednesday's Hannity, invoking George Patton, Omar Bradley, and George Marshall. "No Commander-in-Chief has ever ordered any general to leave citizens behind," he said. The Taliban "have our equipment, they have our people, they have our allies, they are going to threaten us, they're working with the Communist Chinese … Putin … the Iranians."

"Listen to me America," he implored. "Can you hear the screams of the people of Afghanistan tonight?…They're begging for help!" This is going on, he said, while the administration is celebrating. "My God, I've never been more disgusted with the top brass and the government of the United States than I am right now!"

"… Joe Biden lied to us over, and over, and over again. This is a humiliation for our country," he said. "This is part of our history that can never be wiped away."

"And most of all, Joe Biden, you'll have blood on your hands for the rest of your life."

I say Mark Levin sums up the need to impeach President Biden quite well, don't you? In addition to the things we've already mentioned, Biden has certainly offered aid and comfort to the enemy. On the other hand, his administration is now hesitant to even call the Taliban the enemy. Not kidding...

Republicans must be resolute on this. I understand that Senate Minority Leader Mitch McConnell is considering political realities when he says no to impeachment, but we must express our thorough disgust and disapproval in every way available to us, including calls for resignation or impeachment, even if in the end we can't pry an unfit President from office.

Full articles of impeachment should be drawn up, kept, and, if need be, added to, in the likely event that the House and Senate flip next year.

Then we'd have to accept the fact that if we could get through an impeachment trial and articles of impeachment referred to the Senate, it will would not likely result in Biden being ousted. Only if he (or whoever it is who "instructs" him) resigned for the good of the country (like Nixon), would he likely be shown the door.

Which reminds us that on at least one thing, Barack Obama was right: "Elections have consequences." So those Never-Trumpers who betrayed their own convictions about sanctity of life, taxes, regulations, energy independence, Israel, America as exceptional, and big government snooping to vote for Biden hopefully are now repentant of what they have done to America, the world, and specifically to those Americans stranded (yes, Jen Psaki -- stranded) in Afghanistan and left to rot by the man the TDS-folks thought was so caring, compassionate, and competent.

This time it wouldn't be a political show trial. This is for for real. We can't go down in history as the party that just stood quietly by.

The post So, Let’s Talk About Impeachment appeared first on The Stream.