‘8/31’: What President Biden Has Done is a Disgrace 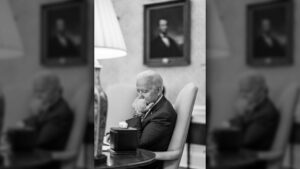 All right, this is just it. The breaking point.

What Finally Did It

Whoever at the White House, State Department, and/or Pentagon comes forward to try to put a good spin on “8/31” by saying we met "the deadline" and are "out of Afghanistan after 20 years" can just, pardon the expression, pound sand. We’re not all out. Don't even bother trotting somebody out to try to clean up for the mentally AWOL Commander-in-Chief in one of your increasingly ridiculous press briefings. You still have some partisan loyals in the media trying to cover for you, but in defending this President you are a pathetic joke. You know perfectly well that we all wanted to be out of Afghanistan, Trump included, and we were going to be, and he would’ve gotten us out in a way that at least made strategic sense. But this latest development is, pardon the expression again, the straw that broke the camel's back.

What finally did it -- what irreparably broke the hearts of me and my staff -- is this image from yesterday, in which the Taliban are flying over Kandahar in one of the Black Hawk helicopters we used to own, which President Biden left for the terrorists along with $90 billion worth of other military prizes as if it were Christmas in August. Yes, we'd already seen them joyriding in a Black Hawk, but this is the first case we've seen of them taking one up and dangling what appears to be the body of a man hanged by the neck. Is the man dead? We don’t know.

The Western Journal reports that it is indeed a dead body and describes this as "a giant middle finger to the Western world that has battled terrorism for the past two decades."

“Official News” From the “Islamic Emerite of Afghanistan”

The video was shared by the Talib Times; it's from a Twitter account claiming to share "official news" from "the Islamic Emirate of Afghanistan." (I assume that's what we're supposed to call it now.) The caption reads, "OUR AIR FORCE!"

And who was this man? Was he dead, or being tortured, or what? Maybe he was one of our interpreters or guides. Maybe a young student at American University, after our State Department refused to admit them to the airport. Maybe just some poor schlub whose beard was too short or who was standing in the wrong place at the wrong time. Or maybe he was a happy Taliban fighter, very much alive, getting his kicks and celebrating the 8/31 defeat of the Americans.

Some have interpreted this video as appearing to show a member of the Taliban "on patrol" over Kandahar. We don't know, but it would be the strangest patrol ever.

Here are more details on the massive array of equipment the Taliban now have, thanks to President Biden. Indiana Rep. Jim Banks, who assembled the list, said the Taliban now has "more Black Hawk helicopters than 85 percent of the countries in the world." Each helicopter cost the taxpayers $6 million, and there is so much more we bought them. We’ve armed our own enemy to the teeth.

The administration has been trying to fool us into thinking the Taliban are "negotiating," working with us, fulfilling our interests by going after ISIS-K, the "real" terrorists who blew up 13 of our service members at the Kabul airport checkpoint. That, as I’ve said, is a distinction without a difference. They are all terrorists and all want Americans dead. If the Taliban and ISIS really were enemies, the Taliban wouldn't have released the approximately 2,000 ISIS fighters we'd detained at Bagram Air Base.

Note to Biden Administration: Just stop insulting our intelligence. Calling ISIS-K the "real" terrorists to take the heat off the Taliban reminds me of O.J. Simpson's lawyers saying he would dedicate himself to finding the "real" killer of Nicole.

And who flew this helicopter? It's not as if some 7th-century Taliban soldier climbed aboard this ultra-sophisticated piece of equipment and somehow knew how to take it up and circle it over Kabul, dead-or-alive person in tow. Are we sure every American helicopter pilot got out? Or maybe the pilot is an Afghan trained by us and now held captive. We don't know, and, even worse, we can't trust the White House to tell us.

Western media have been mostly banned from Afghanistan.

Well, they did allow some media people because they wanted the world to see them take over and declare victory over America.

There’s no telling the horrors that will go on. Those particularly in danger include Americans left behind, Afghan women and girls, interpreters and others who helped American soldiers, and Christian missionaries. We don't know how many thousands of people this might be.

President Biden, when asked about any of this, says he's "not supposed to take any questions" on Afghanistan. (What?) Then he walks away. Can you imagine what the reaction would be if Trump were in office and he did that? They'd use it to push their fake "Russia" narrative and say Vladimir Putin had instructed him not to answer.

Something else: the airlift out of Kabul was supposed to rescue those who helped us, but it turned into such a free-for-all that Afghans weren't vetted before boarding the planes. Here's just one unfortunate example.

Of the 2,000 rescued Afghans being held at Wisconsin's Fort McCoy, not a single one had an SIV, or Special Immigrant Visa. And according to The Washington Times, only "a tiny fraction" of those evacuated have been Americans.

Here’s a Much-Needed Ray of Hope

But here’s a ray of hope: An organization of retired U.S. generals and admirals called "Flag Officers 4 America" has had it every bit as much as we have and is demanding accountability in the form of the resignation of the two top generals, the highest military advisers to President Biden (who should have resigned in the first place rather than carry out his disastrous orders), Secretary of Defense Lloyd Austin, and Chairman of the Joint Chiefs Mark Milley. Know what I call those resignations? A good start.

They've also written a spectacular letter expressing what they think of the modern "woke" military and weighing in on a number of national security issues, including Biden's fitness to serve. If anything will make your day, it's this letter and the long, long list of signatories. Here it is, in pdf form to share far and wide.

The post ‘8/31’: What President Biden Has Done is a Disgrace appeared first on The Stream.