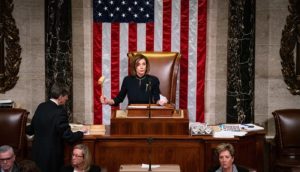 "The difference between America and the Soviet Union was simple: in America, we don't turn government power on political opposition," Banks told the Daily Caller News Foundation. "We won the Cold War by sticking to that principle. If Soviet leaders were around today they'd be rejoicing."

The statement followed a report Monday by CNN that the Select Committee had requested telecommunications companies preserve the phone records of several House Republicans. The committee has yet to formally subpoena the records.

The Select Committee also announced Friday it had sent letters to 15 social media companies requesting they turn over internal communications, data, and protocol information related to the events at the Capitol. Facebook, Google, YouTube, and Reddit have indicated they will comply with the committee's request.

"This has no precedent in American history but there's plenty of precedent in countries like Venezuela, Cuba, the USSR, and China," Banks told the DCNF.

The committee asked social media companies to hand over internal documents and communications on how their algorithms may have contributed to the events at the Capitol, as well as all documents concerning "misinformation, disinformation, and malinformation relating to the 2020 election."

The Select Committee also formally requested communications records from the Archivist of the United States on Wednesday for over 100 Trump administration officials, associates, and family members. Following the committee's requests, Banks sent letters Friday to the general counsels of AT&T, Verizon, T-Mobile, Twitter, and Facebook, urging them not to hand over any private information.

"This type of authoritarian undertaking has no place in the House of Representatives and the information you seek has no conceivable legislative purpose," Banks wrote, arguing the social media and telecommunications companies had a "legal obligation not to hand over individuals' private records unless the subject of the subpoena consents to the information being shared or the company has a court order to turn over the records."

"Speaker Pelosi and the Select Committee are weaponizing their subpoena power against their own colleagues, on the basis of no evidence," Banks told the DCNF. "We know how it ends."

Banks, along with Ohio Republican Rep. Jim Jordan, were initially set to serve on the Select Committee but were left off at Speaker Nancy Pelosi's request.

Content created by the Daily Caller News Foundation is available without charge to any eligible news publisher that can provide a large audience. For licensing opportunities of our original content, please contact licensing@dailycallernewsfoundation.org.