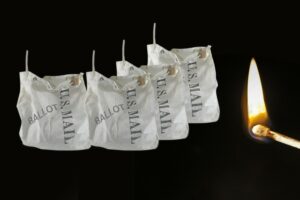 Wisconsin lost track of more than 82,000 mail-in ballots cast in the state in the November 2020 elections -- more than four times the margin of difference separating the two presidential candidates in the state, according to a report by the nonprofit Public Interest Legal Foundation.

The legal foundation, an election integrity watchdog group, released a research brief Friday looking at one of the most closely contested states in the 2020 presidential election.

However, the Wisconsin Elections Commission disputes those findings, as the commission spokesman said the report "mischaracterizes election systems and cherry-picks data," adding, it is "unreliable and frankly, it's sloppy work."

Joe Biden defeated then-President Donald Trump by 20,682 votes in Wisconsin in the November presidential election. However, according to the legal foundation's report, 82,766 mail-in ballots in the state were either undeliverable or suffered an unknown fate.

A further breakdown by the legal group shows that 1.4 million ballots were sent by mail. Of those, 6,458 were undeliverable. An additional 2,981 mail-in ballots were rejected. The vast majority, 76,308, met an "unknown" fate.

"The federal data show the 2020 election had more mail ballots that were never counted than the margin of victory in the presidential election in Wisconsin," J. Christian Adams, president of the Public Interest Legal Foundation, said in a statement.

"This isn't the way to run an election," said Adams, a former Justice Department lawyer in the Voting Section. "Mail ballots invite error, disenfranchisement of voters, and puts the inept U.S. post office determining the outcome of elections."

Wisconsin was among the three most closely contested states in the country, along with Georgia and Arizona, each of which Biden won by 0.6% or less. A Washington Post analysis in February found that flipping about 43,000 votes across those three states could have changed the Electoral College outcome.

The U.S. Election Assistance Commission asks local election officials to provide numbers on how many mail ballots were not returned as voted, were undeliverable, or were otherwise "unable to be tracked."

The inspector general says ballots in the "unknown" column could have been put in the wrong mailbox or thrown out with unpaid bills.

Reid Magney, spokesman for the Wisconsin Elections Commission, objected to the findings, in a detailed email statement.

"Their figures for ballots sent, undeliverable ballots, and rejected ballots count are all incorrect -- in some cases by a wide margin," Magney told The Daily Signal in the email statement.

He referenced Wisconsin's own reporting that shows about 85,000 absentee ballots were not returned, "but there is no indication they 'went missing' or were undeliverable." He said the number used for "unknown" ballots "doesn't add up to any combination of ballot status classifications used in the State of Wisconsin."

Trump has alleged his election loss was fraudulent. However, he has come up short in all of his legal challenges.

Unaccounted-for votes do not prove the outcome would have turned out differently, as it's not knowable how many of the uncounted votes were for Biden and how many were for Trump. But according to the legal group, this marks the first time, going back to at least 2012, that the number of unaccounted-for ballots was larger than the margin of victory.

The Public Interest Legal Foundation report doesn't allege an incorrect election outcome, but focuses on the perils of mass mail-in voting, which occurred in 2020 primarily as a response to the COVID-19 pandemic.

"Expanded vote-by-mail efforts create stress tests on a state's voter-registration list maintenance system and reveal if investments in ballot chains-of-custody were effective," the report says. "When Wisconsin loses track of more ballots than the difference between winning and losing its Electoral College votes, that is a core system failure."

Fred Lucas is chief national affairs correspondent for The Daily Signal and co-host of "The Right Side of History" podcast. Lucas is also the author of Abuse of Power: Inside The Three-Year Campaign to Impeach Donald Trump. Send an email to Fred.

The post Report: Wisconsin Lost Track of 82,000 Ballots in State Biden Won by 20,000 appeared first on The Stream.