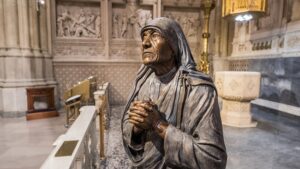 On the eve of the 111th birthday of Mother Teresa of Calcutta, five nuns from Missionaries of Charity arrived in Rome from Kabul with 14 disabled Afghan youths, most of them children. The sisters, members of the religious community that Mother Teresa founded in 1950 and lived with until her death in 1997, have run an orphanage for children since 2006 in Afghanistan. With Italy’s help, they fled that country as the Taliban have taken over.

Every Person is Christ for Me

British journalist Malcolm Muggeridge interviewed her for a 1969 TV documentary and 1971 book, both titled Something Beautiful for God. Muggeridge was skeptical of religion at the time -- he would eventually become Catholic -- but was mesmerized by the “divine light” he saw in and around the work of the Missionaries of Charity, who dedicated themselves to God and the service of the poorest of the poor.

During their discussions, Muggeridge asked Mother Teresa if one of the “troubles” of our time is that we always insist “there must be some collective solution.”

“I do not agree with the big way of doing things,” Mother Teresa replied. “To us what matters is an individual. To get to love the person we must come in close contact with him. … I believe in person to person; every person is Christ for me, and since there is only one Jesus, that person is only one person in the world for me at that moment.”

If that concept was hard for humans to process in 1968, it’s even more so in 2021, as we are deluged by the latest news updates on our phones. Mother Teresa’s words are timeless, however: “I believe the people of today do not think that the poor are like them as human beings. They look down on them. But if they had the deep respect for the dignity of poor people, I am sure it would be … easy for them to come closer to them, and to see that they, too, are the children of God, and that they have as much right to the things of life and love and of services as anybody else.”

As we approach Labor Day, here’s another idea from Mother Teresa that seems critical: “In these times of development, everybody is in a hurry and everybody’s in a rush, and on the way there are people falling down, who are not able to compete. These are the ones we want to love and serve and take care of.”

Mother Teresa urged us not to be lost in hopelessness or be daunted by the seemingly intractable nature of worldwide problems. “We ourselves feel that what we are doing is just a drop in the ocean. But if that drop was not in the ocean, I think the ocean will be less because of the missing drop.”

Mother Teresa believed that faith is lacking in the world “because there is so much selfishness and so much gain only for self. But faith to be true has to be a giving love. Love and faith go together. They complete each other.” She believed that God could be found by getting in touch with people, by meeting them where they live.

As families and communities and churches, do we ask questions about how we can help the orphan and widow -- next door, trapped in foster care, or exiled from their home countries? Is there something beautiful we can do in which we might just learn a little about God, even feel his presence at work in the world? You and I might not be able to fix Afghanistan or even things closer to home, but we can love in more radical ways.