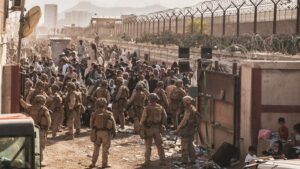 Of all the disturbing and heartbreaking stories coming out of Afghanistan this weekend, this might be the most infuriating of all.

Two highly trusted sources, investigative reporter Lara Logan and Texas Rep. Dan Crenshaw, a former Navy SEAL who lost an eye in an IED explosion in Afghanistan, are independently reporting that over the past few days, Americans have been turned away from entering the Kabul airport. Logan tweeted this on Saturday:

Most Americans don't understand what's happening in Kabul -- been on this all night with no end. U.S. citizens are fighting through enemy lines to get to the airport. When they show their blue passport to 82nd [Airborne] soldiers at the gate, many are turned away and sent back to the Taliban.

Later, she tweeted, "All that stands between these Americans and safety/home is the U.S. govt. and military."

President Biden had supposedly sent the 82nd Airborne to Kabul to facilitate the mass evacuation. What in blazes is going on there?

America, all you need to know is this: Biden is not letting U.S. citizens through the airport gates. It has been impossible to get anyone through for the past 24 hours. This administration has been lying about their intent to save Americans. Unforgivable.

Also unexplainable, in a sane world with a sane Commander-in-Chief. But that's not what we have.

Weirdly, the Biden White House is also trying to say that ISIS-K is the enemy, not so much the Taliban. One Green Beret and others in a position to know report that they're really one and the same. I was on the same track a few days ago when I called this "a distinction without a difference."

Bryan Preston at PJ Media wrote at greater length about this.

We don't know how many Americans are stranded in Afghanistan. Some reports have said 350, but it could be thousands more. The Biden administration says it's evacuated "thousands," but it never says how many of these are Americans.

The State Department, officially in charge of the evacuation effort, apparently is not helping. If soldiers are turning away Americans, it is on their order, not the Pentagon's. Texas Rep. Ronny Johnson tweeted this on Saturday:

I am furious!! My team has been on the phone all day trying to get American citizens out. They have been just outside the airport numerous times, but the State Department will not help them.

Congress won't be looking into this anytime soon. Speaker Pelosi has adjourned them.

American citizens aren't the only ones being turned away at the airport gates. As reported in The New York Times, students and alumni from the American University of Afghanistan were too. This came after about 600 of them had gathered at a safe house and boarded buses to take them, they thought, to freedom. After waiting for several hours, they were told that evacuations had been called off. An email told them to return home. ("Home"?) Because the U.S. troop deadline for evacuation is August 31, it said, the U.S. military was turning from evacuating civilians to getting its own personnel out.

Terrified for Their Lives

Think that's bad? Oh, it's much worse. They’re terrified for their lives now, as they also learned the U.S. military, "following protocol," had shared a list of their names and passport information with the Taliban who were guarding the airport checkpoints. Their identities are now known, and there’s no way to evacuate.

The Taliban have already taken over the American University campus. The staff got out in time and are now safely in Doha. The president of the school says they're committed to "ensuring all students would finish their degrees remotely."

Well, isn't that nice. And how are these students going to be receiving their degrees? Posthumously?

Brad Slager at RedState.com has an excellent commentary on the total incompetence surrounding the withdrawal.

Reading this, though, I have to wonder: Is this level of incompetence due to Biden's lack of cognitive faculties, leading him to be fatally single-minded and stubborn about his arbitrary pull-out date, or is he actually an all-out traitor to his country? If he were the latter, what would he be doing differently? The one other possibility is that he is so monumentally stupid that … well, I have to wonder if even Joe Biden is that monumentally stupid.

It gets even crazier: As Nick Arama at RedState reports, at a time when military aircraft are at such a premium that commercial jets are being called into service, President Biden approved the use of a military plane by Energy Secretary Jennifer Granholm to fly last Monday to a nonessential diplomatic summit in Ukraine. Why the frivolous waste of a military craft when it was so badly needed for the evacuation? This makes about as much sense as anything else going on right now.

A Brave Demand for Accountability

Also, recall the Marine officer who was relieved of duty within hours of criticizing military leaders for the deaths of 13 service members last week? Lt. Col. Stuart Scheller had tweeted: "I have been fighting for 17 years. I am willing to throw it all way to say to my senior leaders, I demand accountability." In case you missed that story, here's a review.

Scheller has given an interview with the New York Post. They also spoke to his dad, who proudly called him "a Marine's Marine." Here's the link; highly recommended reading.

Although we praise Scheller to the skies for having the courage to do what even Biden's generals couldn't do but should have, we do have one small quibble with something he said, relating to the age of his superiors. "The baby boomer's turn is over," he told the Post. "I demand accountability, at all levels. If we don't get it, I'm bringing it."

Speaking as a baby boomer, I would say that most Americans my age are appalled at what is transpiring and want to "bring it," too. Much of my readership, including many veterans, would be considered part of the "baby boomer" generation, and we are just as horrified as he is and also demand accountability. I would not be surprised if some of those officials, say, from the State Department, giving orders behind the scenes are closer to his age.

That said, Scheller, who received a Combat V for Valor and a Bronze Star, has exhibited perhaps an even rarer form of bravery by standing up to his superiors when such action was badly needed. He's a hero for daring to say that the U.S. should never have abandoned the strategic Bagram Air Base. Some of his fellow officers, even though they were supportive, have urged him to take his video down. But over 30,000, some of whom served under him, have liked and commented on it.

Biden and His Administration -- As Bad as They Look

Saturday, Michael Goodwin in the New York Post asked the question, "What if Biden and his administration really are every bit as bad as they look?”

Finally, in her grief, the mother of one of the Marines killed at the airport checkpoint has spoken out. We'll just let her tell you in her own words what she thinks of the current Commander-in-Chief.