‘I Was a Very Happy Atheist’: How a French Woman Came to the US and Found Christ 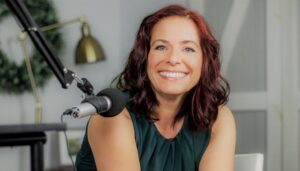 “Oh, gosh, it wasn’t nearly as exotic maybe as you might think if you come from a Christian home,” podcaster Stephanie Rouselle said of her childhood. “I think I had a good, happy childhood. I never really felt a need for God, to be honest.” Stephanie recently spoke with The Stream about how she was raised as an atheist in France but found Christ overseas. “I was just happily oblivious. I was a very happy atheist.”

Stephanie first came to the United States as a foreign exchange student wanting to learn English for her studies in business. It so happened that the family with whom she was placed was Christian. At first, she thought being Christian was a cultural thing. “[F]rom a French atheist perspective 30 years ago, I had this notion that most Americans were at least nominally Christian.” She figured that they would just attend church for Christmas and Easter. She didn’t have a problem with that.

How God Used a Marriage to Reach Her

She saw how the husband and wife treated each other. It was different than anything she’d seen in her own home. While she acknowledges they weren’t perfect, she could see their marriage was working. “[T]hey would regularly do something that I had never seen my parents do, which was argue,” she quickly explained. “I’ve seen a lot of that, but then reconcile and forgive and actually forgive and actually not be mad at each other, but accept that the other isn’t perfect, but that love and trust are real values in this relationship. And they are grounded in Christ. So, definitely God used a healthy, albeit imperfect, marriage to teach me about Him very early on.”

That’s not to say there weren’t growing pains on her journey to Christianity. Stephanie had not only accepted her father’s atheism, but she had made it her own. She and her American “dad” had long talks about religion. “[He] met me philosophically toe to toe every time we would have worldview/philosophical conversations. And he showed me that you do not have to check your brains at the door to be a Christian.”

Her American “mom” just loved her, Stephanie recalled. She could identify with some of Stephanie’s choices, having come to faith later in life. “She just loved on me.” It was a convergence of the mom’s love and the dad’s intellectually stimulating talks that created what Stephanie called a winning strategy. Stephanie began attending church with the family. “That led me to being exposed to the Christian faith at a deeper level, through a very high-quality, in-depth Bible church that was teaching Scripture intellectually but also to my heart.” She came to the understanding that the resurrection actually happened.

So, it’s a very unpleasant place to be as an atheist to realize that the resurrection is a historical fact, it’s like sleeping on a bed of nails. It’s not nice at all when you’re an atheist. And all of a sudden you realize the resurrection is true. I hated every bit of it because it really challenged my worldview. And looking back, God is just gracious to have allowed that crisis to happen to me.

The truth of the resurrection didn’t automatically change everything. She still wasn’t sure if she could trust the God she barely knew. She reacted in what she called a typical arrogant teenager way. She told God, “Okay, I think You’re real, but I don’t know if I can trust You.” God responded, “Well, how do you know You can trust me until you try it?” She told God, “I’m going to try it for one week. I am going to stop fighting what I now know to be intellectually true. … But if I don’t like it, I am taking my life back.”

She didn’t expect what happened next. “[I]t was so liberating to finally be able to stop fighting what I had come to the conclusion to know was true. My heart was fighting my head so bad. It was exhausting. I was exhausted. I was physically, mentally, spiritually, psychologically, emotionally -- I was just wiped out. For a week I could rest from my own striving of trying to be a better god than God for my own life.” She added:

I could take a break and I didn’t realize that’s what I was doing, but for a week, it was the best spiritual vacation I’ve ever taken. For a week I could stop fighting Him. I could embrace Him. I could rest. I could trust. I could stop trying to master my own life. … For an arrogant, selfish, stubborn, self-centered, ambitious 17-year-old atheist, that’s good.

Stephanie said she was, in the words of C.S. Lewis, “the most reluctant convert in all of [France],” even though she was in the States at that time. But she returned to France “the happiest [convert].” She embraced her new faith completely. “[T]hat’s the thing -- God woos us to Himself, and in His meekness and His humility, He will take us where we are, but He reveals of Himself so much to soothe our own hearts that He makes Himself absolutely irresistible.”

When she accepted Christ as her Savior, her father took it personally. He was a virulent atheist. “And so, he took it as an affront to the education he had given me, to who he was, to my intellect. He had always prided himself in my intelligence and all of a sudden I’ve obviously gone mush and stupid. And so, he made a point of rejecting me.” Still, the Lord allowed her to love him well until he passed away. Her mother believes she is in a “phase” that she will outgrow, even though Stephanie has followed Christ for nearly 30 years. None of her family members from her family of origin is Christian.

Stephanie has lived in several countries. She now resides in the United States with her husband and children. She said she’s indebted to the American church for leading her to the Lord, even though the U.S. has dramatically changed culturally in the years since she was a foreign exchange student. “[T[here’s a lot of cultural Christianity happening. There’s a lot of true believers truly, but there’s also a lot of lukewarmness. … And it came as a culture shock.” She added that America needs to rediscover God as much as anyone else in the world. “It’s almost an unreached people group in many ways.”

Stephanie’s response to the cultural Christianity was starting a podcast called “Gospel Spice,” which integrates different cultures and even languages to “spice up” Christians’ time with God. In part, the idea came from her challenge to the Lord many years ago when He asked her to try Christianity. The verse she refers to is Psalm 34:8: “Taste and see that the Lord is good.”

“Our goal is to be the one to … encourage [listeners], to love the Lord your God. Taste and see that He is good.” Her personal motto is “God’s glory, our delight.”

Salt of the Earth

Stephanie wants people to know that we are called to be the salt of the earth and that Jesus is not honored by lukewarm or “stale” Christians. “I think that He will take us where we are. I’m the living proof of that. But He, as has been said, loves us too much to keep us there.”

The post ‘I Was a Very Happy Atheist’: How a French Woman Came to the US and Found Christ appeared first on The Stream.