Incompetent? Or is He Compromised? Biden Opens Door Wide for China in Afghanistan 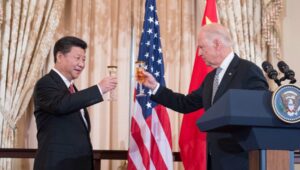 For the rest of his life, Joe Biden will be remembered for the United States’ chaotic withdrawal from Afghanistan. Biden’s insistence on a quick exit exposed his stubborn contempt for his fellow Americans, especially those who died fighting there and others who risk being stranded there.

But why would a veteran of nearly five decades in Washington, a former Senator and Vice President, willfully destroy his own legacy?

Perhaps it’s time to consider the previously unthinkable. Biden might be acting on behalf of a foreign enemy.

Given current events, Americans must consider the possibility that Biden is compromised beyond redemption. Perhaps even to the point of treason.

That enemy likely would be China, which gains tremendous benefits as American influence evaporates. Those benefits didn’t come by accident. They resulted from deliberate foresight and preparation.

A range of minerals worth between $1 trillion and $3 trillion lies buried in Afghanistan. The United States Geological Survey estimated that the country has 2.2 trillion tons of iron ore, 60 million metric tons of copper and 1.4 million tons of rare earths. (The USGS site for Afghanistan is temporarily down for “maintenance.” But you can find information here.) Afghanistan also contains gold, silver, platinum, uranium, aluminum and lithium.

Rare earths are indispensable for producing consumer and military electronics. Rare earths also can provide the key for Afghanistan’s economy. Ahmad Shah Katawazai, a former diplomat who belonged to the Academy of Sciences of Afghanistan, explains.

“Afghanistan's rich mineral resources, if exploited effectively, could prove to be the best substitutes for foreign aid and decrease the country's dependence on donor countries and foreign support,” Katawazai wrote. “Robust policies, strong institutional arrangements together with clear policy direction will pave the way for attracting both domestic and foreign investors.”

Enter China, which already monopolizes the processing of rare earths.

In 2016, China signed a memorandum of understanding with the government of the now-deposed president, Ashraf Ghani. As part of that agreement, China sent $100 million in aid. That funding provided the seed money for China to become the largest investor in Afghan business, and to spend $62 billion on Afghan infrastructure through the Belt and Road Initiative.

By asserting itself economically in Afghanistan, China does more than enhance its presence as a major player in a volatile region. Access to increased mineral wealth strengthens China’s dominance in rare earths, making developed countries more dependent on that nation. The Chinese also can mine Afghan uranium, which they can use for their own nuclear weapons or send to Iran or Pakistan.

“We welcome them,” Taliban spokesman Suhail Shaheen told the South China Morning Post. “If they have investments, of course we ensure their safety. Their safety is very important for us.”

Secretary of State Antony Blinken even called China’s involvement in Afghanistan “a positive thing” as long as the Chinese sought a “peaceful resolution of the conflict” and a “truly representative and inclusive” government.

Biden ensured China’s permanent involvement by disregarding advice from various government quarters. In doing so, he sabotaged an agreement that President Donald Trump brokered between the United States and the Taliban. That agreement included provisions for withdrawing troops.

In February, Congress’ Afghanistan Study Group released a report on those provisions. The report stated that withdrawal depended “not on an inflexible timeline but on all parties fulfilling their commitments, including the Taliban making good on its promises to contain terrorist groups and reduce violence against the Afghan people."

The study group advocated extending the original May 1 deadline for troops to leave. That extension would provide needed time to transfer power peacefully, reinforce civil institutions and secure international support.

“This new approach would protect U.S. national interests in Afghanistan and the region by reducing terrorist threats, promoting regional stability, and protecting important gains in human rights and democratic institutions,” the report stated. “A rash and rushed approach could increase the chances of a breakdown of order in Afghanistan that threatens the security and interests of the United States and its allies.”

Then in April, Biden rejected the advice of three generals to keep a force of 2,500 troops in Afghanistan until peace was secured. One was Gen. Austin Scott Miller, commander of NATO forces in Afghanistan. The others were Gen. Frank McKenzie, commander of American forces in the Middle East, and Gen. Mark Milley, Chairman of the Joint Chiefs of Staff.

In June, reported the Washington Free Beacon, Biden disbanded a State Department bureau Trump established to oversee the emergency evacuation of Americans overseas. Deputy Secretary Brian McKeon signed a memo that approved the “discontinuation of the establishment, and termination of, the Contingency and Crisis Response Bureau.”

In July, two dozen American diplomats in Kabul sent Blinken a confidential cable. They warned that the Taliban would quickly take over after Western troops left, the Afghan army would collapse, and the State Department would need to prepare quickly for an evacuation.

“The classified cable represents the clearest evidence yet that the administration had been warned by its own officials on the ground that the Taliban's advance was imminent and Afghanistan's military may be unable to stop it,” reported the Wall Street Journal.

They’re not talking about why the Taliban is dismantling advanced U.S. military equipment and sending it back over the border to Pakistan, Logan said about Biden’s administration. Worse, they’re not stopping it.

The (National Security Agency) and the National Geospatial Agency, which control the satellites, and all these other arms of the United States government are watching this happen in real time. They are seeing advanced military equipment going over the border into Iran, and going into Pakistan, and they’re doing nothing to stop it. Why not?

If that equipment is going to Pakistan, it could end up in China, where the People’s Liberation Army could study and copy it.

The United States government could change this even today, and they don’t do it, Logan said. The United States has the power to affect anything, and the Afghans know that. They know that the United States could bomb the Taliban’s supply lines, right now. They’re all coming from Pakistan. Everybody knows it.

So why would Biden disregard sound advice and the facts on the ground? The answer might lie beyond incompetence or dementia.

Consider the questionable transactions involving him and his son, Hunter, with businesses owned by the Chinese government. Consider the amount of money both men likely received. Consider the 10% cut “The Big Guy,” a reference to the father, supposedly would get.

Consider the elder Biden’s status as President Barack Obama’s point man on China. Consider Hunter’s deal for a $1.5 billion investment came after he flew to China on Air Force Two with his father.

Consider the money bundled for Obama-Biden’s re-election from those with close Chinese ties.

Consider the millions China invested into the “Biden Center” at the University of Pennsylvania.

Consider Biden’s advisors, who are friendly with and financially linked to China. Consider one of those advisor’s admiration for Chairman Mao.

Consider Biden’s downplaying the threat China poses. Consider his saying China is “not competition” with us.

Consider Hunter’s public lust for sex and drugs. Consider the son’s liaison with a young Chinese woman who lobbied him to get his father to run for President.

Consider, as a result, that both men made themselves vulnerable to potential blackmail. Or that both might be taking bribes from intermediaries representing China.

Consider, also, the former vice president’s successful intimidation of Ukraine. Biden demanded that a state prosecutor drop an investigation into his son’s dealings with Burisma, an energy company, or Ukraine’s government wouldn’t get $1 billion in foreign aid. He even bragged about the feat to the Council on Foreign Affairs.

Consider, finally, the Trump-Russia Collusion Hoax, a plot Joe Biden personally encouraged. Did those accusations represent a campaign of projection and deflection from Biden’s role as a Chinese agent?

At the very least, Joe Biden allowed China to gain an unprecedented foothold in Afghanistan. Given current events, Americans must consider the possibility that Biden is compromised beyond redemption. Perhaps even to the point of treason.

The post Incompetent? Or is He Compromised? Biden Opens Door Wide for China in Afghanistan appeared first on The Stream.