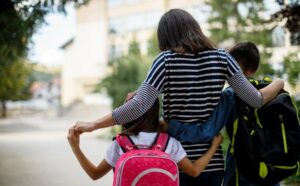 Heritage Action announced the launch of a website for parents and activists who want to keep Critical Race Theory (CRT) out of the classroom on Thursday, according to a statement to the Daily Caller News Foundation.

Executive Director Jessica Anderson of the conservative grassroots organization Heritage Action announced the launch of the SaveOurSchools.com Thursday as a resource for those lobbying to keep CRT out of schools, according to the statement.

"Our children's schools are on the front lines of the fight for the values of the next generation," Anderson told the DCNF.

CRT holds that America is fundamentally racist, yet it teaches people to view every social interaction and person in terms of race. Its adherents pursue "antiracism" through the end of merit, objective truth and the adoption of race-based policies.

The Save Our Schools website includes resources to help identify CRT, the ability to report real-life examples of the curriculum, provides ways to support anti-CRT federal legislation and gives instructions on how to submit a Freedom of Information Act request to state and local agencies.

Heritage Action has organized rallies and panel discussions to fight back against CRT, according to the statement and reported by Fox News and the Daily Signal.

Parents have used school board meetings as a way to express their discontent with school districts teaching CRT, including in Loudon County Public Schools, where two parents were arrested in June for trespassing after they had protested CRT during a meeting.

A teacher in the county, Lilit Vanetsyan, went viral when she spoke out at a district school board meeting against CRT. She warned parents that they should speak out for their kids and if not, they "should be afraid of them rooting for socialism by the time they get to middle school."

Heritage Action has also fought back against the National Education Association's support of CRT, the National Review reported. The U.S.'s largest teacher's union approved a plan to "oppose attempts to ban critical race theory and/or The 1619 Project." “The 1619 Project” was created by the New York Times' Nikole Hannah Jones and promotes the idea that America's "true founding" occurred when slaves arrived in the colonies and frames the history of the country around race and slavery.

The grassroots organization has also produced resources, such as its Reject Critical Race Theory e-book which provides tools to those who are against CRT so they can better understand, identify and reject the ideology when it is being taught in American schools.

"Heritage Action stands with the parents, students and teachers who have experienced first-hand how damaging CRT is to our children," Anderson told the DCNF. "We are putting teacher's unions and CRT proponents on notice that their time is running out and Americans will not stand idly by."

The post Heritage Aims to Equip Parents With Tools to Spot and Stop Critical Race Theory’s ‘Marxist, Racist Ideology’ in Schools appeared first on The Stream.