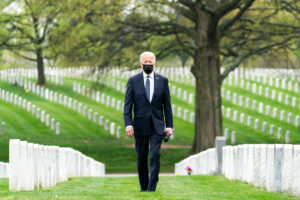 On Tuesday, former President Trump released a powerful new video message about the complete disaster in Afghanistan that comes courtesy of the Biden administration.

The title could not be more fitting: "Surrenderer-in-Chief"

The Taliban is Calling the Shots

The drama in this video is no exaggeration. As Dan Bongino reported Tuesday, the information we're receiving out of Afghanistan is getting even worse. In 10 days, Kabul has fallen into chaos. Our remaining troops have already started withdrawing, I assume to make 100 percent sure we have enough time to get out before the Taliban's deadline of August 31. After all, the Taliban are calling the shots now, and we wouldn't dare go against their orders, would we? Biden confirmed on Tuesday that we will not be staying past that date. Golly gee, the Taliban told us they won't let us, so…hey, what are ya gonna do?

If these people were to deliberately set out to ruin America's place in the world, to destroy America domestically and internationally, from within and without, what would they do differently?

The Taliban also announced they won’t let any more Afghan nationals go to the airport. One might say that ship has sailed. It could be a bloodbath for our friends left behind.

"They [the Americans] have the opportunity, they have all the resources, they can take all the people that belong to them but we are not going to allow Afghans to leave and we will not extend the deadline," said a Taliban spokesman. They act as though they hold all the cards, because, with Biden nominally in charge of our side, they actually do.

U.S. Citizens Are on Their Own

As for U.S. citizens, they don't know what to do now. The Embassy issued a "last alert" for them to leave right then or be on their own, but just 30 minutes later, they recalled it, essentially saying, "Never mind!" Just use your own judgment, they said.

As we’ve said, when Psaki admonished Peter Doocy as "irresponsible" for saying Americans were "stranded," she was lying. Communications from panicked Americans say they absolutely are stranded. "Our lives are in extreme danger," said one tearful American mom in a phone message. "We get more of the news to stay put than to be told that you are gonna be evacuated. This is not comforting at all. We don't know if we're gonna make it out."

Obviously, Americans and our friends in Afghanistan made the mistake of awaiting instructions and trusting the U.S. military to evacuate them safely when it was time to go. They know better now.

The Taliban have surrounded the airport and control all comings and goings. As Sean Hannity put it Tuesday night, "Biden, he just signed the death certificates of every Afghan that, in fact, has helped the U.S. in the last 20 years..." Considering that the Taliban were able to retrieve computer data from the abandoned U.S. Embassy on the identities of all the Afghans who helped us, that is no exaggeration. Those friends of ours, and their families, remaining in the country will likely be tracked down and murdered.

Biden gave a scripted press conference Monday, bizarrely focusing mostly on vaccines and infrastructure. Later, White House press secretary Jen Psaki cheerfully praised the evacuation in Kabul as "the largest airlift in U.S. history" and said she wouldn't characterize it "as anything but a success." It was surreal. Psaki sported such a happy smile, it seemed at times she might burst into inappropriate laughter, just as Vice President Harris so often does. Perhaps laughter is contagious around the White House.

(It occurs to me that if masking-up wouldn't stop the spread of inappropriate laughter, it would at least hide the maddeningly inappropriate smiles.)

Murders (at least 20 are known to have been killed), beatings, gassings, stabbings (including of children), and extortion -- this is what our "success" looks like, so far.

No Accounting of American Citizens

Politico national security reporter Alex Ward obtained a leaked report from the State Department saying that only 4,407 American citizens had been flown out since the evacuation began on August 14. This number is dwarfed by the "low-end" estimate of 10-15,000 Americans, and possibly many thousands more, who have actually been living there.

The number given by the White House yesterday was 21,600 people flown out from Monday to Tuesday. If that sounds impressive, keep in mind that this is not the number of American citizens but the total number of evacuees, period. We might never know who those people are who made it onto the planes, perhaps instead of Americans, their interpreters and other Afghan helpers. At this writing, officials still refuse to give an accounting of American citizens.

But on Monday, reporters received assurance from Jake Sullivan, Biden's national security adviser, that "we are actually overperforming in terms of evacuation numbers."

Even President Obama's former ambassador to Afghanistan, Ryan Crocker, said on Face the Nation Sunday that Biden's actions in that country have emboldened violent Islamists and created "a global crisis." Specifically, he's concerned about what the narrative of the Taliban defeating the "Great Satan" is going to do to rile up radicals in Pakistan, which is a nuclear power with 220 million people. Watch him here.

Since their editorial appeared, conditions have deteriorated so much that even many on the left have joined in that opinion. And this still isn't as bad as it's going to get.

Of course, Biden has tried to shift blame to former President Trump, but this is all on him. In case you missed Margot Cleveland's excellent piece on the 16th, I'll link to that here.

Cleveland points out a number of very effective Trump policies that Biden simply trashed once he got into office. Everything regarding Afghanistan was ultimately his call. Even if it's in our country's best interest to withdraw, the horribly failed execution of the withdrawal is his fault. Shame on him for trying to weasel out and blame others.

Watching President Biden and his team, the question more and more are asking is this: If these people were to deliberately set out to ruin America's place in the world, to destroy America domestically and internationally, from within and without, what would they do differently? What would they need to do differently? I know, I can't think of anything, either.

The post ‘Surrenderer-in-Chief’ Biden Caves to Taliban Orders appeared first on The Stream.