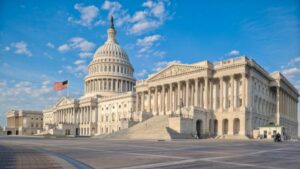 The House Tuesday voted on a deal to adopt the framework for President Joe Biden's $3.5 trillion budget and advance the bipartisan infrastructure bill after Democratic leadership and moderates broke an hours-long stalemate over how the two would be prioritized in the coming weeks.

The deal, which passed 220-212 on a party-line vote, allows for the House to begin crafting its reconciliation bill and sets the infrastructure package up to pass the chamber on Sept. 27. It followed multiple Rules Committee hearings and hours of intraparty deliberations between House Speaker Nancy Pelosi and her team and a group of moderate Democrats who insisted on taking up the infrastructure bill first, directly opposed to both dozens of progressives and the speaker herself.

On the House floor, Pelosi said the deal represented "a great day of pride for our country and Democrats," adding that "by Oct. 1, we will hope to have in place ... the legislation for infrastructure that is bipartisan."

The impasse torpedoed the original plan to vote on the rule Monday night, even as top Democrats pleaded with the holdouts in their party to vote in favor.

"You all have to vote for the goddamn rule," House Rules Chairman Jim McGovern reportedly said Monday night. "Why wouldn't we begin this process? Whether we pass it today or on Oct. 1, none of the money can be spent until Oct. 1."

The standoff continued Tuesday, but was resolved after leadership committed to voting on the infrastructure package on Sept. 27.

"These negotiations are never easy," McGovern later told reporters Tuesday. "It is my hope that my colleagues who recognize the very simple choice to advance the president's agenda or obstruct it."

Republicans, however, railed against the deal as a "scheme" that would enable a reckless spending spree that would cripple the country and young Americans.

"The American people are fed up with the Democrats' reckless spending," said Missouri Republican Rep. Jason Smith, the House Budget Committee's ranking member. "They bring forth a budget resolution that ... has $6 trillion in new spending. The most spending in the history of this country."

"[Vermont Independent Sen.] Bernie Sanders may have lost the presidential primary, but his policies have won," he added.

The deal also advances Democrats' voting rights bill named for the late congressman and civil rights activist John Lewis, setting up a vote to pass it in the coming days.

Democrats had remained at odds for weeks over how the House should approach the infrastructure package and budget. Dozens of progressives have vowed to oppose the bipartisan bill unless the House first passes the budget, a mammoth spending bill that addresses priorities from climate change and childcare to health care and immigration, giving Pelosi little room for error given her slim three-vote majority.

Following the progressives' demands, however, nine moderate Democrats pledged the opposite, vowing to tank their party's budget if the House did not first pass the infrastructure package.

"With the lives of hardworking American families at stake, we simply can't afford months of unnecessary delays and risk squandering this once-in-a-century, bipartisan infrastructure package," the group, led by New Jersey Rep. Josh Gottheimer, wrote on Aug. 13. "It's time to get shovels in the ground and people to work."

In response to their position, Pelosi, who had previously committed to bringing the budget to the floor first, floated passing both simultaneously, but to no success.

"We are firmly opposed to holding the president's infrastructure legislation hostage to reconciliation, risking its passage and the bipartisan support behind it," they wrote.

Florida Rep. Stephanie Murphy joined their ranks Monday evening, further damning the vote that was supposed to take place. "I cannot in good conscience vote to start the reconciliation process unless we also finish our work on the infrastructure bill," she wrote in an Orlando Sentinel op-ed.

Despite the budget's advancement, the $3.5 trillion figure is unlikely to translate into law. Moderates in the Senate have echoed their House counterparts regarding their concerns over the bill's size and lack of scope, meaning that the bill as written will not survive a 50-50 Senate.

A spokesman for Arizona Sen. Kyrsten Sinema in a statement Monday called the bipartisan package "a historic win for our nation's everyday families and employers," and said it, "like every proposal, should be considered on its own merits." He added that "proceedings in the U.S. House will have no impact on Kyrsten's views about what is best for our country -- including the fact that she will not support a budget reconciliation bill that costs $3.5 trillion."

Shortly after Sinema's comments, West Virginia Sen. Joe Manchin urged the House to "put politics aside" and pass the bipartisan package first. The bill passed the Senate on Aug. 10, and the budget framework was adopted just before 4 a.m. the following day.

"This is not about party or politics, it's about doing what's right for the country," Manchin said. "It would send a terrible message to the American people if this bipartisan bill is held hostage."