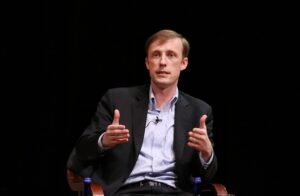 An ex-advisor for the Obama administration called on President Joe Biden to fire his national security advisor in an opinion piece for USA Today on Monday.

"The disaster that unfolded in Afghanistan is illustrative of other major issues at the White House," Brett Bruen, the former director of Global Engagement for the Obama administration, wrote in USA Today. "The people, plans and processes the president has put in place to keep America safe are not working."

Bruen argued that the Taliban's accelerated takeover of Kabul and the U.S. failure to successfully evacuate Americans and Afghan allies beforehand created the "most unnecessarily embarrassing day in the history of the National Security Council."

"Our people were unprepared," Bruen wrote. "We failed to get them out of harm's way. The Afghan government and military clearly were not ready, either."

For that reason, Bruen said Biden should terminate National Security Advisor Jake Sullivan and "several other senior leaders who oversaw the botched execution of our withdrawal from Afghanistan."

While Bruen worked with Sullivan when they were both in the White House and considers him to be "bright," he argued Sullivan's lack of overseas experience leaves a "disconnect between ideas and implementation."

Write @USATODAY Biden has to "shake up his national security team. The disaster that unfolded in Afghanistan is illustrative of other major issues @WhiteHouse. The people, plans & processes the president has put in place to keep America safe arent working."https://t.co/JayOfbJ3Y6

Sullivan was the person who needed to figure out how to navigate a successful withdrawal from Afghanistan, but failed, Bruen wrote. Biden's mind was "made up" when it came to leaving the country, but that didn't mean Sullivan should have "allowed the president's push for an end to our involvement in the country ahead of Sept. 11 to drive the American timeline."

Bruen criticized the Biden administration's foreign policy as a whole, noting how the disengagement from issues surrounding countries such as Cuba and Israel has been "surprising".

"The White House has overemphasized the superficial and failed to make the necessary systematic changes after four destructive years of President Donald Trump," he wrote.

It's the personnel Biden is surrounding himself with that's leading to these flaws, Bruen wrote. "The White House has opted to pack political types into the most influential positions."

"We can see the administration's predilection for putting political appointees in national security positions in their choice of ambassadors," he wrote, noting Biden should never select another donor to represent the U.S. abroad again.

"There is an urgency to repairing the extensive damage done to our reputation and credibility on the world stage," Bruen added. "That's going to require the president spending a lot more time than he has focused on global crises and listening to those who did not work on his campaign."

Sullivan and the White House did not immediately respond to the Daily Caller News Foundation's request for comment.

The post Biden Should Fire His National Security Advisor, Ex-Obama Advisor Argues in Wake of ‘Botched’ Afghanistan Withdrawal appeared first on The Stream.