How America’s Atheists Can Win in Their Fight Against Prayer 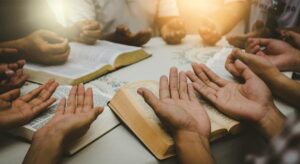 Atheists are upping their attacks on prayer. Antifa thugs attacked a family prayer gathering in Portland last weekend. A proposed bill in Australia could make it illegal to pray for someone's sexuality even if they asked you to. Gay activists are calling for a "hate speech" ban on prayer for sexual preference change. And atheists mock prayer in cartoons like this one.

I don't get their strategy. Just what do they think they’ll win this way, and how?

They don't think prayer works, right? So why on earth should it bother them? It ought to be the most harmless thing in the world, in their minds. If it were my movement, my strategy, I'd say "Let the Christians pray. The more they do that, the less time they're doing something that might actually hurt us. And the more we rile them up for it, the more they're going to fight back."

That's assuming they're actually thinking about what they're doing. It could just be they're so greedy for power, they don't know when to stop grabbing for more. If so, that's not a good sign, for them or for us. Power-mad atheists did countless damage in the last century. I'd rather it were over for good. Again, though, I wonder what they’re hoping to win this way.

What They Think About Religious Freedom

I’m pretty sure they think it’s about control, at any rate, and about stamping God out of their lives. That’s why religious freedom -- any religious freedom -- is a problem in their eyes. It isn’t liberty, it’s "privilege,” says the Freedom from Religion Foundation. Religion gets special treatment; they call it a violation of the First Amendment. It’s almost as if it weren't written for the very purpose of giving religion special treatment, and for good reason.

That’s my prayer: that they would win the only victory that counts. By God’s grace I intend to keep on praying for it, no matter what.

The American Humanists likewise want you to think there's nothing sacred about religious freedom. Our view of it is "weaponized," they say, especially against LGBT persons:

When there's a conflict between religious rights, and other civil and human rights (especially LGBTQ+ rights), the courts are deciding that religious rights matter more. That's leading to LGBTQ+ folks (and potentially many others) getting denied public accommodation services, like wedding cakes from bakeries and flower deliveries from florists.

If the Bill of Rights were up to them, they'd have sexual freedom in it instead of religious rights. Notice that no one in these cases has ever been denied public accommodation services. They could always go get those services elsewhere. Only with certain Christians, though, can they force those services. Plainly, that's the freedom they insist on: the “right” be able to force people to do what secularists make them do.

It's all about who's in control, or who rules the world. They can't point their pepper spray at God's eyes, so they target His believers instead. They should read more history. They're turning the American church into a suffering church, and the record is clear: Suffering refines a church, making it stronger, not weaker. Suffering churches pray more, not less; and more intensely, too.

Christians have always suffered, yes, but not for our Christianity; not here in America. And there's something different about suffering for Jesus' name. 1 Peter 4:14 says, "If you are reproached for the name of Christ, blessed are you, for the Spirit of glory and of God rests upon you. On their part He is blasphemed, but on your part He is glorified." Jesus Himself says (Matthew 5:12) we’re blessed “when they revile and persecute you and say all kinds of evil falsely for My sake;” and that we should "rejoice and be exceedingly glad, for great is your reward in heaven."

Suffering strengthens us on earth, too, as long as we maintain hope and trust in God. How many of us really know what it means to love our enemies? I don't; I haven't had enough real enemies to find out. I do know it must be a supernatural sort of love, which gives me hope that when the time comes, you and I will be gifted with the grace we need to love that way. And when we do, the Church will grow.

When they attack us; we win, even if we lose -- as long as we maintain hope and trust in God.

How Atheists Can Still Win

That doesn't mean I'm eager to get pepper sprayed. I don't like suffering. Yet I'm confident God knows what He's doing, and that a reward in heaven forever is much better than a life of bland comfort on earth.

Atheists think they're playing a power game, and that they've got the goods to win. "He who sits in the heavens laughs" (Psalm 2:4). You want to arm-wrestle with God? The one who (Jer. 32:17) "made the heavens and the earth by [His] great power and outstretched arm"?

Believers aren't asking for a fight. We don't want one. But if it comes, the outcome's easy to predict. God's enemies may come out looking on top in a battle or two, but they won't win a thing in the long run. Not unless they do it the same way we do; not unless God gives them victory the same way He does with us all. They could have victory with God -- but it will have to be truly with Him, not against Him.

That’s my prayer: that they would win the only victory that counts. By God’s grace I intend to keep on praying for it, no matter what they try against us.

The post How America’s Atheists Can Win in Their Fight Against Prayer appeared first on The Stream.