Man Charged With Murdering 18 Year Old 2 Days After Being Released From Prison Due to COVID-19: REPORT 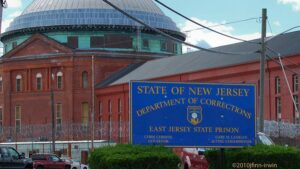 A New Jersey inmate allegedly shot and killed an 18-year-old man two days after he was released from prison due to concerns over COVID-19, NJ.com reported.

Convicted burglar Jerry Crawford, 25, was released on parole on Nov. 4, 2020, the New Jersey Department of Corrections told NJ.com, as part of an effort to mitigate the spread of the coronavirus in the state's prisons. The state let out over 2,000 inmates in November 2020 due to rising deaths and infections in its penitentiary system.

Crawford, along with Yusuf Waites, 23, was charged on July 23 for shooting and killing David Scarbrough in Bridgeton, New Jersey, on Nov. 6, 2020, two days after he was released from prison. Waites had been released from prison on Oct. 10, less than a month before the murder, according to NJ.com.

Tonight, I signed an EO allowing vulnerable, low-risk inmates to receive temporary home confinement to protect their health and the health and safety of those working in our correctional facilities, striking a balance between public health, public safety, and victims' rights. pic.twitter.com/N2xiT6ZzEC

Both men were charged with first-degree murder and first-degree conspiracy to commit murder, NJ.com reported.

Police found Scarbrough's body with multiple gunshot wounds in a field near an apartment complex, according to NJ.com. Surveillance footage from the apartment complex showed Scarbrough with Crawford and Waites before the murder allegedly took place, the outlet reported.

Scarbrough was last seen walking with Crawford and Waites towards the field where his body was found, according to NJ.com.

Dozens of states released inmates from prisons early in the pandemic in an attempt to curb the spread COVID-19, with many getting arrested a short time later. Some inmates in California deliberately infected themselves with the virus in an attempt to be released early.

The post Man Charged With Murdering 18 Year Old 2 Days After Being Released From Prison Due to COVID-19: REPORT appeared first on The Stream.