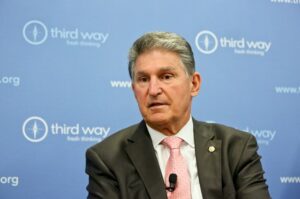 West Virginia Democratic Sen. Joe Manchin raised concerns over the $3.5 trillion budget plan the Senate passed Wednesday, warning that the level of spending would have a negative impact on future generations.

"Adding trillions of dollars more to nearly $29 trillion of national debt, without any consideration of the negative effects on our children and grandchildren, is one of those decisions that has become far too easy in Washington," Manchin said in a press release Wednesday.

The Senate passed the $3.5 trillion budget in a 50-49 vote early Wednesday morning after the plan was proposed the previous day. Manchin voted yes on the budget, saying it was important to "discuss the fiscal policy future of this country."

The senator has previously expressed concerns over the rising national debt, warning the U.S. could enter a recession if spending continued.

"I urge my colleagues to seriously consider this reality as this budget process unfolds in the coming weeks and months," Manchin said, warning of "grave consequences" should the budget go ahead as planned.

My statement raising concerns about the consequences of passing a $3.5 trillion budget: pic.twitter.com/gGsEXcVTxd

"It is simply irresponsible to continue spending at levels more suited to respond to a Great Depression or Great Recession -- not an economy that is on the verge of overheating," the senator added Wednesday.

"The challenge we now face is different: millions of jobs remain unfilled across the country and rising inflation rates are now an unavoidable tax on the wages and income of every American," he said. "These are not indications of an economy that requires trillions in additional spending."

Arizona Democratic Sen. Kyrsten Sinema expressed similar doubts in July, saying she would not support a $3.5 trillion spending bill and pledging to "develop" the spending plan in the coming months. Both senators have shown a willingness to work with Republicans, each refusing to vote to do away with the filibuster as well as playing active roles in negotiating the bipartisan infrastructure bill passed Tuesday.