New Climate Change Report Once Again Promises, As It First Did in 1990, We Only Have a Few Years Left 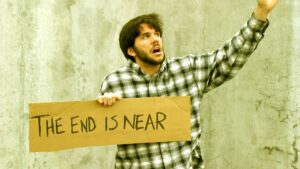 How many times can you be wrong about a matter of great importance and still be taken seriously and not be fired?

The answer is: you can never be fired for being wrong in the right direction.

The Experts making statements about how dire the climate is have been wrong for decades, and they are still wrong in their sparkling new IPCC Climate Assessment Report 6 released Monday.

Now, as then, they warn that “extremes” are on their way. They haven’t got here yet, but they’re coming. They’re always coming.

The difference between AR6, and ARs 1-5, is not so much in the kind of errors made, for these haven’t changed at all, but in the certainty expressed in them. It’s only a slight exaggeration to say that somebody did a “Find & Replace” of every instance of “very likely” in AR5 and changed them to “virtually certain.”

The rhetoric has been amplified, but the mistakes remain. The Experts who write these reports have never lost any authority for their repeated blunders, nor will they be taken any less than seriously for making them again now.

Because they are always wrong in the direction our rulers want them to be.

Why Not To Trust Experts

Before we come to what that means, I’ll give you the one proof that shows why the climate Experts are wrong.

You don’t need formal training in thermodynamics to follow this proof.

You won’t need to understand the physics of fluid flow. You won’t have to worry about knowing the difference between vorticity and the Coriolis effect. Convective available potential energy can remain a mystery. You won’t even have to know any statistics.

This is good, because the vast majority who opine about global warming also know nothing about these subjects, even as they assure you that their plan to “save” the planet must be implemented.

The idea in the 1970s was that man-made pollution from burning fossil fuels was going to knock back the sun’s rays, plunging us into a new ice age.

In the 1980s, when the temperature began to warm in places, the theory changed, but the predictions of doom did not. Now, burning fossil fuels was going to trap the effects of the sun’s rays, casting us into the flames.

Again, the atmosphere was going to change because of man. Again, everything was going to suffer because of this. Experts said every animal that is cute, photogenic, or delicious was going to die; whereas every beast or plant that bit, stung, or poisoned was going to flourish.

My friends, this cannot be. It is impossible that atmospheric change can bring only harm, and cause no good. That Experts insist only evil things can occur is why you can know, without doubt, that they cannot be trusted. Experts, like you, also know that much good can come from a warmer, more carbon-dioxide-rich planet, but the Experts choose to deny these goods because of politics.

Nothing has changed in the new “guidance” from the UN. Only now they scream about a “red alert” instead of an almost red one. Or whatever color they used last time. Now, as then, they warn that “extremes” are on their way. They haven’t got here yet, but they’re coming. They’re always coming.

Or they have got here, but you need to have the kind of specialized training mentioned above to recognize them. I have that training and I don’t, because I disagree with the methods used to “see” these mysterious extremes.

It will take some time to go through the new IPCC report in full. It comes in just shy of 4,000 pages. But for the moment, I can leave you with this. It is a link to a report written by government Experts 19 years ago that asserted with absolute confidence that “within 20” years Britain would be “Siberian,” that mega-droughts, world-wide famine, and even nuclear war would occur.

Because of a tenth or so of a degree increase in global mean temperature.

William Briggs is the co-author, with Douglas Axe and Jay W. Richards, of The Price of Panic: How the Tyranny of Experts Turned a Pandemic into a Catastrophe.

The post New Climate Change Report Once Again Promises, As It First Did in 1990, We Only Have a Few Years Left appeared first on The Stream.