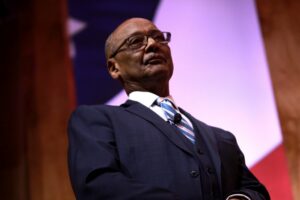 The life-changing impact that Robert Woodson has had on the lives of countless individuals and communities was highlighted Thursday evening during a 40th-anniversary celebration of the center named for him in Washington, D.C.

One after another, the grassroots leaders and individuals who have been touched by Woodson's work at the Woodson Center thanked the civil rights leader for the ways in which he has empowered blacks and others living in America's inner cities and low-income neighborhoods.

"I thank you, Bob, because you give me inspiration to never quit," Paul Grodell, pastor of Beyond the Walls Church, a ministry to alcoholics, the homeless, and drug addicts in Elyria, Ohio, said, choking back tears as he delivered remarks during the celebratory event.

"The power of change in communities lies within the people experiencing the problem," Woodson said.

More than a dozen community leaders from across America, colleagues, and program beneficiaries expressed their gratitude to Woodson over the course of the evening.

Their praise for the leader proved aptly appropriate when Woodson announced at the end of the night that he is retiring at the age of 84 to "make way for younger leadership."

"It's been a fabulous 40-year journey," Woodson said. "I know what the disciples of Jesus must feel like to walk with people and witness someone perform miracles, because the grassroots leaders that I have been blessed to serve have been miracle workers."

In coming months, Woodson will move into the role of CEO emeritus at the Woodson Center -- for many years known as the National Center for Neighborhood Enterprise -- working with the organization's new president to further its mission.

The Woodson Center's board of directors will begin the search for a new president in the fall, with the hopes of naming a successor in 2022, according to a press release from Woodson and board Chairman Gregory Snyder.

The Power of Change in Communities

For 40 years, the Woodson Center has fought poverty by investing time and resources in local organizations and grassroots leaders who already were working within at-risk neighborhoods across America.

"The power of change in communities lies within the people experiencing the problem," Woodson said from the stage as he explained the organization's model to address poverty, violence, and crime across America.

"The people with the solutions are not the ones with the money," Woodson said, lamenting government's tendency to fund organizations and individuals who "parachute in" to an unfamiliar community in an effort to bring change.

Instead, the Woodson Center assists "low-income leaders to walk through the doors of opportunity," he said.

The Heritage Foundation, parent organization of The Daily Signal, is one of the many partners that Woodson has made over the years in advancing proven solutions to poverty and crime. Last year, Heritage honored him with its annual Salvatori Prize for American Citizenship.

The anniversary celebration paid tribute to each decade of Woodson's work and many of his organization's victories over 40 years.

Woodson founded the Center for Neighborhood Enterprise in 1981 after resigning as a resident fellow at a conservative think tank in Washington, the American Enterprise Institute. In 2016, it became the Woodson Center in honor of its founder.

In the 1990s, Woodson launched one of the center's hallmark programs, called Violence Free Zone. The program is a national initiative aimed at reducing violence in schools and communities through mentorship of high-risk youth who are often the cause of disruption.

Woodson started the program in the infamously rough D.C. housing project of Benning Terrace in 1997.

Woodson partnered with Alliance of Concerned Men, a nonprofit organization in Washington focused on preventing and intervening in situations of youth crime. He began forming relationships with the young men in Benning Terrace who literally were killing one another.

Derrick Ross, who grew up in Benning Terrace, shared his personal story of transformation Thursday night.

Ross recalled watching as his neighborhood declined into something like an Iraqi war zone in the 1990s. He got into the habit as a teenager of taking a photo of himself every week, he said, because "I did not want to have an old 'when he was good' picture on my obituary."

Ross credited the men with Alliance of Concerned Men, working in partnership with the Woodson Center, for saving his life by "pestering" him and coming into his neighborhood every night to build relationships with young men.

"They wouldn't stop," Ross said of these leaders. He said their persistence gave him, and many other young people, "that little pause" to step back and think about his life and the choices he was making.

Today, the Violence Free Zone program has decreased violence and suspensions in more than 30 of America's most trouble-plagued schools.

Although the Woodson Center has been cultivating grassroots relationships and providing training and resources to local groups since its founding, the organization launched a formal Community Affiliates Network in 2016. The network provides training, technical assistance, and operational support to members.

Dawn Barnett, co-executive director of the Milwaukee-based youth outreach program Running Rebels, expressed her gratitude to Woodson during the event. Barnett explained that the Woodson Center's efforts to bring grassroots leaders together offered her the encouragement she needed to continue her challenging work.

"Some of the [gatherings] were at crucial times when we were tired, we were tired," Barnett told Woodson. "And to be around others, and to be encouraged by them, kept us going. So thank you."

The collection of essays and free lessons for students aims to "tell the whole story of the United States, the stories of oppression and the stories of resilience and triumph over adversity," Ian Rowe, a contributor to the project, said at the celebration.

Rowe is one of about 20 scholars who have contributed to 1776 Unites and the accompanying free curriculum. Teachers across all 50 states have downloaded the curriculum more than 15,000 times.

The Woodson Center is "not just about railing against the problems, it's about creating solutions that we can put in the hands of people who are trying to solve problems in their own communities," Rowe said.

Partnering with Mothers Following the Death of George Floyd

Many of the issues in America's low-income communities were highlighted in 2020 after the death of George Floyd, who died on a Minneapolis street as a police officer pressed his knee against Floyd's neck for nearly nine minutes.

The calls to defund the police that occurred after Floyd's death concerned Woodson as well as many mothers who have lost their children to black-on-black violence in America.

Woodson partnered with black mothers, including Sylvia Bennett-Stone, who lost her daughter to violence in 2004, to found Voices of Black Mothers United. The organization works to prevent violence in black communities across America and give a platform to mothers who have lost children to gang-related violence.

"Thank you, thank you for hearing our voice," Donita Royal, the Indiana region state lead for Voices of Black Mothers United, said to Woodson during her remarks.

Royal was joined on stage by several other mothers who have lost children or other close relatives to neighborhood violence. The mothers presented Woodson with an award bearing the inscription: "Acknowledged by the people, but proposed by God."

Although Woodson will be stepping aside for new leadership to take over the work of the Woodson Center, the civil rights activist and national leader says he will remain involved.

"You retire from the job, you expire from a calling," Woodson said. "I'm not really leaving, but I'm stepping aside to make way for sustainability. I want the center to go on for another 40 years."