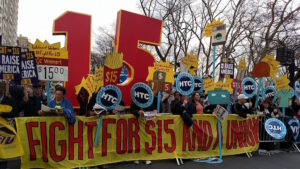 Many studies have documented the effect of minimum wage laws on lost jobs, including the Congressional Budget Office's estimate that a $15-an-hour minimum wage would cost 1.4 million jobs.

That's because mandating higher wages for some workers means no wages for others.

But it wouldn't just be workers who lost their jobs that would be hurt by higher minimum wage laws.

Recent studies show that even workers who keep their jobs and receive higher wages can be made worse off through other changes to employment caused by minimum wage laws.

The following are three unintended consequences of minimum wage laws on workers who actually keep their jobs and receive higher wages:

That study found that a $1 increase in the minimum wage reduced workers' hours by about 21% per week, but with a roughly 28% increase in the number of workers scheduled, employers kept total hours essentially constant.

The reason for the shift? Since federal (and sometimes state) laws mandate certain benefit provisions conditional on the number of hours employees work, one way that employers adjust to being forced to pay workers above-market wages is to reduce and reallocate workers' hours across weeks to avoid paying certain employee benefits.

In California, the annual $1 increase in the minimum wage translated into scheduling four additional workers each week, but giving everyone five fewer hours of work.

As the study noted, "This means, for an average worker in California paid the minimum wage, her total wage compensation is reduced by 13.6% when increasing the minimum wage from $11 to $12."

Since the rationale for reduced hours was to save on benefit costs, it wasn't just workers' paychecks that fell after minimum wage increases. They also had fewer benefits.

The Employee Retirement Income Security Act of 1974 requires that employees who work at least 1,000 hours per year (about 20 hours per week) must be eligible to participate in a company's retirement plan, and the Affordable Care Act (aka Obamacare) requires employers to provide health insurance to employees who work 30 hours or more per week.

The study of California's minimum wage increases found that each $1 increase resulted in 23% of workers dropping below 20 hours a week and becoming ineligible for the company's retirement plan, and 14.9% having their hours reduced below 30, making them ineligible for employer health insurance benefits.

Another study that examined low-income workers' and families' access to employer-sponsored health insurance and retirement benefits over the 2005 to 2016 period that included many state-level minimum wage increases found that every $1 increase in the minimum wage was followed by a 1 percentage point decrease in the probability of workers and their dependents having employer-sponsored health insurance.

Measurable compensation isn't the only thing that matters to workers. They also value considerations such as flexibility and predictable work schedules.

Moreover, just under half of those businesses admitted that they would transition full-time workers to part time and assign fewer hours to each individual worker as a means to balance out increased wage costs.

Something Has to Give

These three unintended effects of minimum wage increases show that it's not just workers who lose their jobs who are affected. Even those who keep their jobs can end up worse off.

For an average worker in a California store in our data, we estimate the net loss of welfare due to their reduction of hours, lower eligibility for benefits, and less consistent schedules (that resulted from a $1 increase in the minimum wage) to be at least $1,590 annually or 11.6% of the worker's total wage compensation.

Higher wages are a common goal, but there's a difference between higher wages produced by market demand and those as a result of government command.

When workers achieve higher wages by gaining education and experience to become more productive, they earn higher wages and the economy grows more. In short, no one loses.

But when workers achieve higher wages through government mandates -- that is, employers being forced to pay higher prices for the same amount of work -- something has to give.

While proponents of a $15 minimum wage would like to believe that the only consequences would be reduced profits for wealthy corporations, that's simply not the reality (especially since small businesses are more likely to employ minimum wage workers).

Our further analysis suggests that the combination of the reduced hours, lower eligibility for benefits, and less consistent schedules (that resulted from the minimum wage increase) may substantially hurt worker welfare, even when the overall employment at the stores stay unchanged.

If policymakers want to help increase workers' wages without taking away other employees' jobs and reducing the welfare of workers who are allegedly "helped," they should remove government-created barriers to work and higher wages, including making it easier for employees to pursue alternative and low-cost education options, such as apprenticeships; eliminate unnecessary occupational licensing requirements that prohibit workers from using their existing skills to make a living; and open more doors to flexible and independent work opportunities.