The Morning Brew: Lollapa-FLU-za! Democratic Mayors Party Despite Their Own Mandates and Simone Gets Back in the Games 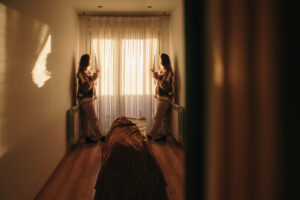 Welcome to a new week, a new month and a new Morning Brew.

A big thanks to Tom Gilson, Nancy Flory and John Zmirak for filling in while I was on assignment. My assignment? Reading cozy mysteries and rambling around Southern Maryland.

Today's Brew is a quadruple dose of double standards. Plus, the one woman who may know better than anyone what Simone Biles is going through.

But first, breaking news from Tokyo:

Beam Rhymes With Scream! Simone Biles Will Be Competing Tuesday in the Balance Beam

After stepping away from the Team, Individual All-Around and a couple individual events, gymnast Simone Biles will be competing Tuesday in the balance beam event.

We are so excited to confirm that you will see two U.S. athletes in the balance beam final tomorrow – Suni Lee AND Simone Biles!! Can't wait to watch you both!

If anyone can relate to what Simone Biles is going through it's our LOI colleague Sheila Walsh. Seemingly at the top of her game in 1993, she broke down during a live telecast, and stepped away from her career to concentrate on her mental health. "Sheila Walsh on Simone Biles: I Was Shamed for Putting My Mental Health First, Too. I Applaud Her Courage."

What a great thing it’ll be to see her back in action. Just to be competing makes it a victory. And if she does her thing … wow, what a story that’ll be!

Woke Rhymes With Choke: US Women's Soccer Team Stunned by Canada 1-0 in Semi-Finals. No Platform Protests for Them.

Guess we won't have to worry about whether the US Women's Soccer Team will kneel or turn their backs or spit in the dirt or moon the flag during the National Anthem at the Olympics. They've just been defeated 1-0 by Canada in the Olympic semi-finals.

"Oh, no! The Delta Variant is Here! The Windy City is facing a viral siege! You have to put on masks even if vaccinated! Danger! Crisis! ... Huh? What's that? Lollapalooza's in town? Oh, well. Never mind with the masks and lockdowns. We'll wait. It’s time to rock-n-roll!"

Reason 101 why we can't take these Democratic leaders seriously about COVID. Take Chicago's hapless mayor Lori Lightfoot. She declared Monday that COVID restrictions would be re-imposed if new cases topped 200 a day. Then she remembered that the rock festival Lollapalooza was coming to town. Suddenly her tune changed.

So there she was, maskless, at Lollapalooza herself along with 100,000 compacted shouting, singing, hard-breathing music fans. The Daily Wire has the story if you want to read more about it.

Then there's DC's Mayor Muriel Bowser. She ordered everyone in her city to wear masks indoors regardless of vaccination status. Then after the order went into effect promptly officiated a wedding at a posh hotel, where she and the guests were not wearing masks. The Washington Examiner reports what happened next:

Bowser, who was not sitting at the table designated for her during wedding toasts, did not wear a mask despite not actively eating or drinking. When approached by the Washington Examiner to explain why she was maskless at an event now legally obligated to enforce mask compliance, security blockaded the free press.

(Funny how much security is around these Democratic-elected officials who were keen on reducing police.)

Oh, it gets better. Bowser announced Thursday the mask mandate would go into effect at 5 a.m. Saturday morning. Why 5 a.m. Saturday morning? Could it be because she had a big 49th birthday bash for herself planned for Friday night? Sure, she could have put the mandate into effect Friday night, but how often do you get to party with Dave Chappelle!

Muriel Bowser mask mandate started at 5AM this morning.

Then there's Joe Biden. He issues a mandate that all federal employees must be vaccinated or repeatedly tested. But wait. The massive American Postal Workers Union -- which worked so hard to ensure Biden "won" in November -- complained. And suddenly, U.S Postal Workers are exempt from the mandate, according to the Washington Post.

Well, that's understandable. It's not like postal workers interact with the public.

But Joe wasn't done. We know he's letting COVID-infected illegals waltz across the border and then transporting them (at your expense) all across the country. Texas Gov. Greg Abbott issued an executive order allowing state troopers to stop any vehicle suspected of carrying illegal immigrants, on the grounds they may be spreading COVID-19. Biden's response? He's suing Texas.

The Democrats have been itching for the returns for years. Don't have to go to a lake to go fishing. You can stay right in the Swamp.

But let's go back to the heady, prosperous days of summer 2019. Why were Democrats calling for Trump's impeachment? In the middle of congratulating Ukraine's president on taking office, President Trump asked about Joe and Hunter's shady Burisma dealings in that country while Biden was VP.

And why was that so awful? Because Joe was a potential political foe in the 2020 election.

In January 2020, rather than pay attention to the pending COVID crisis -- or for that matter, the proof of Biden Inc’s Ukraine shenanigans -- House Democrats impeached Trump.

Donald Trump has been dropping heavy hints that he will run again in 2024. Meaning he is the likely foe for Biden or Harris. And Biden is ordering ... not asking ... the IRS to hand over tax returns from when Trump was a private citizen.

How, my dear Democrat friends, by the standards you yourself set, is this not an impeachable offense?

Then again, as the TEA Party learned, using the IRS to wreck political opponents is perfectly legitimate if you are a Democratic administration.

Trump Met With Members of His Cabinet?

Former President Trump huddled with some members of his cabinet late last week, his former chief of staff Mark Meadows revealed to Newsmax. The gathering took place Thursday at Trump's golf club in Bedminister, New Jersey ... and they weren't hitting the links.

“We’re looking at what does come next,” Meadows told Cortes & Pellegrino.

“I’m not authorized to speak on behalf of the president,” he said, “but I can tell you this, Steve, we wouldn’t be meeting if we weren’t making plans to move forward in a real way, with President Trump at the head of that ticket.” They weren’t hitting the links. But they were hitting the campaign trail.

Al Perrotta is the Managing Editor of The Stream and co-author, with John Zmirak, of The Politically Incorrect Guide to Immigration. You can follow him at @StreamingAl at Gab, ;Parler, MeWe and now GETTR.

The post The Morning Brew: Lollapa-FLU-za! Democratic Mayors Party Despite Their Own Mandates and Simone Gets Back in the Games appeared first on The Stream.