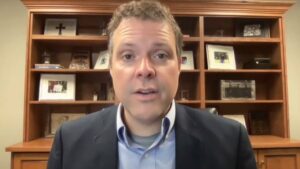 “This is even bigger than the attack on organizations like ours. This is an attack on the way God created the world,” Herbie Newell, president and executive director of Lifeline Children's Services, told LIFE Today Live host Randy Robison.

They discussed the challenges many faith-based children’s placement agencies face. Increasingly, local governments and government agencies are demanding ministries violate their religious beliefs regarding marriage and family for the sake of “public accommodation.” For organizations like Newell’s, public accommodation means placing children in the homes of people who practice homosexuality or transgenderism or otherwise do not agree with their statement of faith.

Robison asked Newell what Christians can do to help organizations like Newell’s.

First, Newell said to pray that “the gospel will be illuminated in the minds and the hearts of unbelievers.”

Second, Newell encouraged Christians to invest in their families “to show the watching world that as Christians, … we don’t just preach one man and one woman for life -- we really do believe it. And through the thick and the thin … we’re loving one another and modeling what a healthy, godly family looks like.”

Third, Newell said to write congressmen and senators and to advocate locally “for the protection of organizations” with “closely held religious beliefs.”

“They don’t hear from us enough. They hear from others, and it’s a very powerful lobby that’s trying to change the narrative of ‘what does family mean’ in our country,” Newell said. “I’m afraid as Christians we’re not having that same voice.”

Robison ended the program by encouraging viewers to get kids involved in supporting orphans through Lifeline’s Stand for Orphans initiative.

LIFE Today Live and The Stream are produced by Life Outreach International.

The post ‘An Attack on the Way God Created the World’: Adoption Leader Talks Fighting Government Intrusion on Faith, Family appeared first on The Stream.