A First Hand Account of January 6 From a Trusted Source 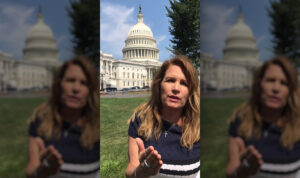 Nancy Pelosi's sham hearing on the January 6 events in Washington, D.C., is now beginning. In the spirit of hyper-partisanship, Pelosi refused to allow the Republicans to select their own members of the committee, kicking two of them off.

Given the fact that it is hard to know who we can trust in the reporting of so-called "news," I thought you might be interested in hearing from a person who was at the rally on January 6th, and who was in the U.S. Capitol Building when the incursion took place. Former Congresswoman Michele Bachmann was there that day, in the building, praying. Last week we were with her in Washington, D.C., for the Well Versed events with Members of Congress, since the Bachmann works with our ministry.

We stood in front of the Capitol Building, and I asked her (with no warning) what happened here on January 6th. Here is what she said. I would trust Michele Bachmann ten thousand times over Nancy Pelosi and her fake committee from which she removed two GOP members (including the brilliant and articulate Congressman Jim Jordan) simply because she does not like what they say and believe.

Here is the unrehearsed yet profound account of what occurred January 6th.

Dr. Jim Garlow and his wife Rosemary live in San Diego but have a ministry called Well Versed with Bible studies to Members of Congress, persons at the United Nations in New York City, and with Members of Parliament and government leaders in many nations.

The post A First Hand Account of January 6 From a Trusted Source appeared first on The Stream.