In Praise of Schism 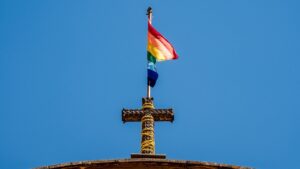 Jesus was talking about Hell when He said, "If a kingdom is divided against itself, that kingdom cannot stand" (Mk. 3:24 NIV). Apparently, the Dark Lord runs a tight ship. He does not tolerate division. His "kingdom" advances in unison.

Sadly, such solidarity appears to be waning in the Christian Church.

Augustine famously said, "In essentials, unity; in non-essentials, liberty; in all things, charity." But while all should be loved, not everything should be believed. Which is why this call for unity, liberty, and love did not prevent the Church fathers from calling out heresies. In fact, Augustine himself "was called to write against the many heresies of the period -- Manichaeanism, Donatism, and Pelagianism, and in so doing he defined the shape of orthodox doctrine."

“Orthodox Doctrine” in the Early Church

At one time, the "shape of orthodox doctrine" included human sexuality. The differences between men and women and their conjoining in marital union were counted as intrinsic to those doctrinal and ethical "essentials." Though not articulated in the creeds, the early Church fathers openly condemned licentiousness, incest, adultery, pederasty, sodomy, and homosexual behavior. Furthermore, the early Church countered societal norms by their distinctive stance on human sexuality and marriage.

In his book From Shame to Sin: The Christian Transformation of Sexual Morality in Late Antiquity, historian Kyle Harper describes how Christian views on sexuality challenged pagan norms:

"Christianity gave a name to the array of sensual opportunities beyond the marriage bed: porneia, fornication. … The coordinated assault on the extramarital sexual economy marks one of the more consequential revolutions in the history of sex." (3)

"Porneia, fornication, went from being a cipher for sexual sin in general to a sign for all sex beyond the marriage bed, and it came to mark the great divide between Christians and the world. Same-sex love, regardless of age, status, or role, was forbidden without qualification and without remorse. Unexpectedly, sexual behavior came to occupy the foreground in the landscape of human morality." (85)

A Grave Indictment of the 21st Century Church

In part, the early Church radically changed their world because of a distinct, uncompromising sexual ethic. Sexual behavior was not a "non-essential," to use Augustine's phrase, but occupied "the foreground in the landscape of human morality."

In their recent General Assembly, the Presbyterian Church of America (PCA) voted to disallow those who identify as gay from ordination. Their decision, of course, was met with radically disparate responses. While some were publicly thankful, calling it "a clear and unified voice against errors that have been creeping into our beloved denomination," others bemoaned "This is a time to grieve."

In some quarters, this disparity is leading to more profound rifts. For example, the United Methodist Church recently floated a plan entitled the Protocol of Reconciliation & Grace Through Separation which would allow churches to "split along theological lines" regarding issues of LGBTQ inclusion.

Indeed, a church's stance on LGBTQ affirmation has now become a defining distinctive. Websites like Church Clarity help the "seeker" to learn which churches in their area are "clear" in their position on homosexual love. As their "About" page states, "Ambiguity enables those with power to operate without accountability and cause real harm." Thus, "clarity," specifically about a church's stance on LGBTQ inclusion, is central to this group's aims. One no longer need wander unbeknownst into a community of homophobes.

That the early church's views on sexuality "came to mark [a] great divide between Christians and the world" is a grave indictment of the 21st century Church.

So whereas "theological lines" once drew a distinction between the Church and the world, they now draw a distinction between churches themselves. Sound doctrine no longer applies to such "non-essentials" as biblical inerrancy, the nature of God, or the atonement. The Church's core creeds now serve only to reinforce LGBTQ affirmation. Doctrinal "clarity" matters only insofar as said doctrines impinge upon cultural norms. In that case, they are reimagined to appease the watching world.

Is Affirmation an Evangelistic Necessity?

As a result, some sociologists and statisticians now see LGBTQ affirmation as an evangelistic necessity. As statistician Ryan Burge notes,

In 2008, just one in three white evangelicals between the ages of 18 and 35 believed that same-sex couples should have the right to be married. Beginning in 2012, though, acceptance of gay marriage jumped from 36% to 56% in just six years. There's reason to believe that two-thirds of young evangelicals now disagree with their church's position on this issue.

Such an extreme demographic swing places evangelicalism "on a collision course ... with a culture that is rapidly liberalizing." However, while the early church maintained a distinct, uncompromising sexual ethic, the contemporary church avoids such collisions by simply changing theological lanes.

Burge summarizes the issue this way:

One of the dominant understandings of how churches attract new members is referred to as religious economy theory. In this view, churches are equated with businesses. Each provides a product to a potential audience. If the product is palatable, it will see an increase in 'sales,' expressed as church attendance. If the church does not meet the needs of consumers, attendance will dwindle, and the church will go out of business.

From this perspective, the evangelical church is selling Blackberries while Apple has just begun shipping iPhones.

In today's "religious economy," commitment to traditional biblical sexual ethics is akin to hawking Blackberries in an Apple market. Which makes LGBTQ affirmation an evangelistic imperative. Thus Burge concludes, "If the white evangelical tradition expects to maintain its share of the religious landscape" it must begin "to slowly shift its stance on... same-sex relations" (emphasis mine).

In other words, preaching the Gospel of gay inclusion is now a means of outreach. Being "seeker friendly" includes waving rainbow flags, preaching around the infamous "clobber verses," and lauding "Love is Love." Whereas the Church historically affirmed the centrality of the monogamous heterosexual male-female union, reshaping culture as a result, reaching contemporary culture requires we pander to it. Sadly, surrendering an "essential" truth is a sacrifice many Christians appear willing to make.

Pacifying misguided faith is a most unloving practice. Love is love... except when it turns a blind eye to one's self-destruction.

Contrary to Burge's assessment, ceding to "young evangelicals" or the culture that spawned them is not a sign of health -- schism is. "They went out from us," said the Apostle John, "but they did not really belong to us" (I Jn. 2:19 NIV). It is noteworthy that the author of these words is also referred to as the Apostle of Love.

Apparently, in the economy of biblical love, schism is a necessity. Love may plead for the Prodigal to stay, but in the end it remains on the porch, watching the poor soul stride towards Sodom. Pacifying misguided faith is a most unloving practice. Love is love... except when it turns a blind eye to one's self-destruction. Therefore, affirming a "great divide between Christians and the world" is, in fact, the most loving thing a believer can do.

In her article Love Your Neighbor Enough to Speak the Truth, Rosario Butterfield, herself an ex-lesbian, tells this story:

A few years ago, I was speaking at a large church. An older woman waited until the end of the evening and approached me. She told me that she was 75 years old, that she had been married to a woman for 50 years, and that she and her partner had children and grandchildren. Then she said something chilling. In a hushed voice, she whispered, "I have heard the gospel, and I understand that I may lose everything. Why didn't anyone tell me this before? Why did people I love not tell me that I would one day have to choose like this?" That's a good question. Why did not one person tell this dear image bearer that she could not have illicit love and gospel peace at the same time? Why didn't anyone -- throughout all of these decades -- tell this woman that sin and Christ cannot abide together, for the cross never makes itself an ally with the sin it must crush, because Christ took our sin upon himself and paid the ransom for its dreadful cost?

The Church fails to love its neighbors when we refuse to speak the truth about same-sex relationship. The compromise may make our "product" more "palatable," but it also makes us complicit in the potential deformation of precious souls.

As Chesterton quipped, "The Christian ideal has not been tried and found wanting. It has been found difficult; and left untried." Oddly, we don't mind that the rich man finds it difficult to get to heaven (Matt. 19:24). So why do we deem it unconscionable that a gay man would? Indeed, Jesus commanded His would-be disciples to take up their crosses and follow Him (Matt. 16:25). The most honorable thing a Christian "ally" can do for their LGBTQ neighbor is to not minimize the cost of discipleship.

Of course, speaking the truth will always run the risk of schism. Face it, celebrating traditional biblical sexual ethics will not win the Church a lot of converts. Nor will it recapture the Millennial youth who've caved to culture. However, it could accomplish the next best thing -- highlight the "great divide between Christians and the world."

That those who still call themselves "Christians" are found on the other side of that divide is a tragedy all its own.

Mike Duran is a freelance writer, artist, and speaker, whose short stories, essays and commentary have appeared in The Gospel Coalition, Relief Journal, Breakpoint and other print and digital outlets. His paranoir novel, The Ghost Box (Blue Crescent Press, 2014), was selected by Publishers Weekly as one of the best indie novels of 2015.

The post In Praise of Schism appeared first on The Stream.