Inflation Something to be Concerned About Now 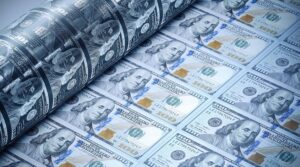 Inflation has been accelerating this year, and it isn't hard to see why.

Government spending has been so overwhelming that even former U.S. Treasury Secretary Lawrence Summers, a Democrat, said recently:

We are printing money. We are creating government bonds. We are borrowing on unprecedented scales.

Summers foresees the rise in inflation harming the poor the most. Others at risk include savers and people on fixed incomes.

The U.S. Bureau of Labor Statistics, which keeps track of inflation, reported July 13 that inflation was 5.4% in June, the highest percentage jump since 2008.

Inflation has been increasing on a seasonally adjusted month-over-month basis at an accelerating rate also, as the following graphic shows. 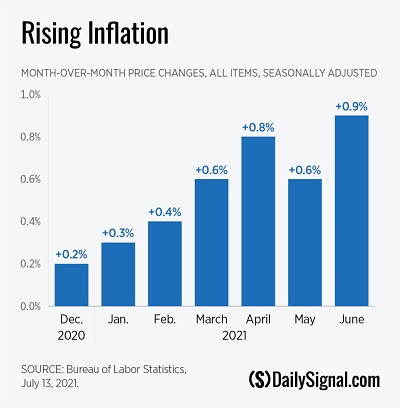 The Heritage Foundation's Index of Economic Freedom contains ample evidence from around the world that widening deficits and a growing debt burden erode a country's economic vitality by stripping its people of their economic freedom and condemning them to the mercy of government edicts and orders that prevent them from using their own ingenuity to thrive.

The U.S. and Economic Freedom

The U.S. has fallen to 20th place in the world in economic freedom, out of 178 countries rated. We are now in the middle rankings of the "mostly free" countries, our lowest ranking ever, and that's almost entirely due to our treacherous decline in fiscal health, which is calculated based on government debt and deficits.

If fiscal health was the only consideration in ranking economic freedom, the U.S. would rank only 152nd in the world out of 178. The fiscal health score alone would put us in the economically repressed category.

Trillions of dollars more in deficit spending is being sought by policymakers on nonessential items, such as the newly coined term "human infrastructure," an abomination that treats humans as nothing more than a cog in a societal machine.

This new definition of shovel-ready infrastructure includes massive amounts of corporate welfare, a huge expansion of Medicaid benefits, federal rules to undermine right-to-work laws across the country, a 'Civilian Climate Corps' that would use billions of taxpayer dollars to fund legions of environmental activists, and billions in subsidies for buying electric vehicles.

But redefining language is nothing new for the left. When it can't win public opinion with the truth, it changes the meanings of words to trick the public into its way of thinking.

It's time the Biden administration stops pretending that inflation is not happening. Economic freedom is not automatic, nor a given, and government must limit its debt and deficits if we are to preserve our fundamental liberties.

Patrick Tyrrell is a research coordinator in The Heritage Foundation's Center for International Trade and Economics.

Anthony B. Kim researches international economic issues at The Heritage Foundation, with a strong focus on economic freedom. Kim is the research manager of the Index of Economic Freedom, the flagship product of the Heritage Foundation in partnership with The Wall Street Journal. Read his research.

The post Inflation Something to be Concerned About Now appeared first on The Stream.