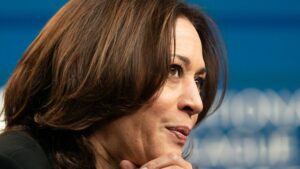 “So when I was a young girl, Uncle Sherman taught me to play chess. He said, 'You need to know, life is like that chessboard. There gonna be all kinds of players on that board. They'll have all kinds of different moves. You have to think strategically. You have to learn to think about what that tenth move will be before you make that first move. And if you're smart,' he taught me, 'that pawn can take out that king.'”

Positioned to “Take Out That King”

With President Biden in the news because of the horrendous, incomprehensible performance he gave at a townhall meeting on Wednesday, it seems like a good idea to take another look at the person who is positioned on that chess board to take his place.

We've known her lately as someone who seems in over her head, who is given huge areas of responsibility and then ducks them, who giggles and cackles uncontrollably and inappropriately. Who is she, really? How did she get to this position on the chess board, and what does it mean for the country if (when) she "takes out that king"?

If Harris had been appointed to a federal position that required confirmation, Loudon's article postulates, she would not have passed the background check because of her 40 years of close ties with Marxists, Communists, Maoists, and Communist China. But as an elected official, she is not subject to the security clearance process.

On October 14, 2020, Trevor Loudon at The Epoch Times had a detailed article about her background, and it seems like a good time to revisit that.

Loudon, an author, filmmaker, and public speaker from New Zealand, wrote the book THE ENEMIES WITHIN: Communists, Socialists and Progressives in the U.S. Congress, and also filmed the 2016 documentary “THE ENEMIES WITHIN.” Here's a trailer from that movie.

Steeped in Radicalism Her Entire Life

Of course, we knew Kamala was raised around radical leftists; her father was a professor in the Economics Department at Stanford University, where he used to say he was too far left even for them, and her mother was a longtime political activist, first in India and later in California. “Uncle Sherman” was an activist lawyer. Recall that Kamala, on the campaign trail, spoke of being wheeled through protest marches in a stroller, calling for "Fweeedom!!" (We don't know if that story is true, but we do know for certain that her parents and their circle of acquaintances were radical left activists.)

But there's much more here, about specific organizations, their heroes (such as Fidel Castro and Che Guevara), and their ultimate aims. RedState has a good summary, which also first appeared in October 2020, of the information turned up by Loudon. (All of it was available to the curious before the election, even though the mainstream media seems to have put it in the same category as Hunter Biden's laptop and pretended it didn't exist.)

The RedState piece was written by retired U.S. Navy Capt. Joseph R. John, who's formerly with the FBI and is currently chairman of the Combat Veterans for Congress PAC.

An Affair to Remember

It's not disputed that Harris got into politics after having an affair with then-California Assembly Speaker Willie Brown, Jr., who was 60 and married at the time. We know he guided her fledgling political career, which led to her being elected attorney general of California.

But aside from that, I wonder how many know that when Brown ran successfully for mayor of San Francisco, he strongly endorsed Marxism and was, in turn, endorsed by the Communist Party USA. In the RedState article it states, "Willie Brown is widely regarded as one of the Chinese Communist Party's best friends in the San Francisco Bay area."

I don't want anyone to be tarred with guilt by association. For example, Van Jones is mentioned in Loudon’s piece and is perhaps overzealously described as a Communist, but the fact that I count him among my friends -- a brother in Christ who has been a guest on my TV show -- should never convince anyone that I share his views on politics or economics. He might be far to the left on those issues, but if Communists are atheists, he isn’t either of those things.

That said, Kamala Harris has been steeped in radicalism her whole life through her closest connections. (Imagine if a conservative candidate and his family and friends had associated exclusively with John Birchers and such.) Read on to learn about the Chinese Communist ties of Kamala's husband Doug Emhoff and also of her younger sister Maya, whose close associate is one of Kamala's major financial sponsors, the wealthy leftist Steve Phillips. (How is it that so many leftist, even Marxist, men marry very wealthy women?)

If Harris had been appointed to a federal position that required confirmation, Loudon's article postulates, she would not have passed the background check because of her 40 years of close ties with Marxists, Communists, Maoists, and Communist China. But as an elected official, she is not subject to the security clearance process. (I would add that this observation applied to Barack Obama as well.) As the article states,

Harris would never have been approved for acceptance to any of the five military service academies, been appointed to a U.S. government sub-cabinet position, or would have been approved to fill a sensitive position for a high-security defense contractor. Yet if Joe Biden were elected, Harris would be a heartbeat away from the President.

The article goes on to cite not only Harris' ties to the Communist Chinese, but Hunter Biden's business dealings there. (Remember -- this came out before the election, but only conservative media were focusing on it.) As RedState says,

If the American voters read the background information [in Trevor Loudon's article] about Kamala Harris, they would never support her election as Vice President of the United States. Joe Biden…will continue to decline in cerebral awareness; he will never be able to fill out a four-year term of office. If Biden is elected, the Socialists, Marxists, and Communists who control Kamala Harris are planning to enact provisions of the 25th Amendment in order to remove Joe Biden from office, so Harris can become the first Communist President of the United States.

Obviously, Bernie Sanders, as a Democratic Socialist, wouldn't have been able to win the general election, but "moderate" (ha) Joe Biden, with a female and black running mate to check a couple of boxes, had a much better chance. So that's how Kamala's chess piece ended up where it did on the board. The moves started much earlier.

The post Kamala Harris: Take Another Look as Biden Falters appeared first on The Stream.