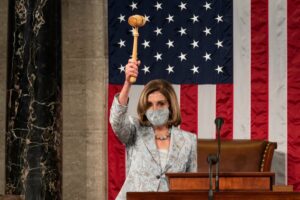 Does she want to seek truth or just stigmatize Trump voters? The answer came into sharp focus today.

Certainly Pelosi's decision has nothing whatsoever to do with Jordan's curiosity over the lack of security at the Capitol that day. And Pelosi's role in that. "There's one fundamental question that I hope Democrats will actually answer," Jordan has said. "That is why wasn't there a proper security presence that day? And frankly, only the speaker can answer that question."

In response to Pelosi blocking Jordan and Banks, House Minority Leader Kevin McCarthy has pulled all five GOP nominees to the Select Committee. McCarthy called Pelosi’s action “an egregious abuse of power.” It “will irreparably damage this institution.”

Denying the voices of members who have served in the military and law enforcement, as well as leaders of standing committees, has made it undeniable that this panel has lost all legitimacy and credibility and shows the Speaker is more interested in playing politics than seeking the truth.

If she doesn’t seat the Republican nominees, he said, Republicans will investigate the event on their own.

Rep. Jordan said on Twitter the move just proves the Select Committee is “nothing more than a partisan political charade.”

Speaker Pelosi just admitted the obvious, that the January 6th Select Committee is nothing more than a partisan political charade. https://t.co/wGRO9fV2kt

One Republican does still sit on the Select Committee: Trump-hating Liz Cheney. Yeah, her. She wants the full truth about January 6 about as much as her father’s friends want to be buckshot in the bottom.

It opens with a blatant lie. "The violent domestic attack on Congress on January 6 was the worst assault on the Capitol since the War of 1812.”

For that matter, how about that progressive MSNBC junkie who wanted to assassinate dozens of GOP members preparing for the Congressional softball game? He had cased the field for weeks. He was just waiting for the chance to kill Republicans.

No guns on January 6. No bombs. And six months later, still no charges of insurrection or sedition. Just some cases of assault, trespassing, a guy in Viking garb, grandmas taking tourist shots in the Rotunda ... and a box of LEGOS.

And an unarmed female veteran shot to death by a Capitol Hill lieutenant. Pelosi is protecting his name to a far greater extent than she did the Capitol.

Katie Pavlich responded to Pelosi's snake move. "And this is why good Republicans rejected the commission. It's another partisan witch-hunt dedicated to solidifying Democratic power and smearing/classifying conservatives as domestic terrorists."

Added Mollie Hemingway, "What a joke the entire thing is."

Meanwhile, Rep. Lauren Boebert is asking the Justice Department why BLM/Antifa rioters who attacked Federal buildings aren't getting the same harsh treatment as those were in the Capitol January 6th. She cites the very clear "inconsistent application of the law with respect to rioters across the country."

Al Perrotta is the Managing Editor of The Stream and co-author, with John Zmirak, of The Politically Incorrect Guide to Immigration. He’s also the barista for The Morning Brew. You can follow him at @StreamingAl at Gab, Parler, MeWe and now GETTR.

The post Speaker Pelosi Blocks Two GOP Congressmen From Her ‘Select Committee’ to Investigate January 6 appeared first on The Stream.