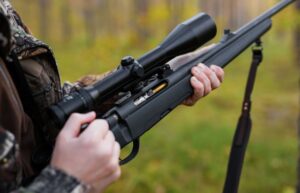 New York Gov. Andrew Cuomo recently issued a "first in the nation" executive order on gun violence, declaring it a "disaster emergency" in his state and vesting himself with the authority to treat it as a "public health crisis" just like the COVID-19 pandemic.

Cuomo, a Democrat, also signed into law a bill to hold gun manufacturers and sellers liable for otherwise lawful conduct that nonetheless is deemed to create a "public nuisance."

The new law effectively opens up the floodgates to frivolous lawsuits designed to kneecap a lawful industry and, with it, lawful gun ownership around the state of New York.

Part of the Solution

The truth is that lawful gun ownership doesn't lie at the heart of gun-related violence or crime rates. To the contrary, guns in the hands of peaceable citizens may be part of the solution.

Almost every major study on the issue has found that Americans use their firearms in self-defense between 500,000 and 3 million times a year, according to a 2013 report by the Centers for Disease Control and Prevention. We have good reason to believe that many of these defensive gun uses aren't reported to police, much less make the local or national news.

For this reason, The Daily Signal each month publishes an article highlighting some of the previous month's many news stories on defensive gun use that you may have missed -- or that might not have made it to the national spotlight in the first place. (Read accounts from 2019 and 2020 here.)

The examples below represent only a small portion of the news stories on defensive gun use that we found in June. You may explore more by using The Heritage Foundation's interactive Defensive Gun Use Database.

June 1, Akins, Georgia: A man apparently attempted to enter a house without permission while screaming about "demons and the devil," police said. The residents repeatedly asked the man to leave, but after several unsuccessful attempts to open the front door, he walked to a shed on the property. A male resident of the house approached him and fired a warning shot into the ground. The man appeared undeterred, so the resident -- fearing the trespasser would assault him and his wife -- shot him in the leg. The man faced criminal charges after his release from the hospital, police said. June 3, Meadow Vista, California: An intruder entered a residence by breaking a window with a ceramic rabbit he found in the yard, police said. A woman who lived there, hearing water running in a bathroom that should have been unoccupied, alerted her husband. He grabbed a shotgun and confronted the intruder as the intruder was exiting the bathroom, having helped himself to a shower. He held the intruder at gunpoint until police arrived. June 4, Wasilla, Alaska: An intoxicated man wielding an ax forced his way into a woman's home and threatened to kill her, police said. The woman drew her handgun and shot the intruder, who was transported to a local hospital with non-life-threatening injuries. Police were considering charges against the intruder. June 6, Omaha, Nebraska: Police determined that a 19-year-old man was justified in shooting his father with a rifle while defending his mother from a violent attack. After shooting and wounding his father twice, he called 911 and stood outside the residence to wave down officers as they arrived, police said. June 8, Mount Oliver, Pennsylvania: A woman's ex-boyfriend confronted her outside her apartment complex, damaged her car, and tried to force his way into her apartment before he was shot by an armed guest who came to the woman's aid. The wounded ex-boyfriend fled in his vehicle but later was found by police. June 10, Harris County, Texas: A pregnant woman fatally shot her boyfriend when he assaulted her during an argument, police said. Several children ranging from ages 10 to 17 were inside the home at the time, but not harmed. The woman's injuries were "consistent with an assault," police said, and she was taken to a hospital for treatment. June 16, Provo, Utah: When a homeowner returning from an early morning run opened his garage door, a man entered the garage and got into the homeowner's truck in an apparent attempt to steal it or property inside it. The homeowner opened the passenger side door, pulled out the intruder, and placed him in a headlock while calling for his son to grab his firearm. He held the burglar at gunpoint until police arrived. Investigators linked the intruder to two other vehicular burglaries. June 19, East Nichols, New York: A man taking care of a residence for the out-of-town owners used his shotgun to detain a burglar, police said. The burglar produced a handgun and pointed it at the man as the housesitter tried to escort him to a nearby residence to call 911. The housesitter fatally shot the burgler, then ran to the neighbor's house to notify police. June 21, Arvada, Colorado: Police called an armed good Samaritan a hero for springing into action and preventing an attempted mass shooting of police officers. The good Samaritan intervened after seeing a man fatally shoot an officer with a shotgun in an ambush. He drew his handgun and fatally shot the cop killer. Tragically, though, another officer fatally shot the good Samaritan in the confusion as he held an AR-15 that the killer had retrieved from a truck, police said. June 25, Fort Worth, Texas: A driver used his firearm to protect himself and his family during a road rage incident. Police said a motorcyclist was riding illegally between lanes when he was almost hit by another driver who could not see him. Enraged, the motorcyclist sped ahead and stopped in the middle of the highway, bringing traffic to a halt. He pointed a handgun at the driver, who begged him to put the gun down because he had children in the car. When the motorcyclist continued to make threats, police said, the driver pulled out his own firearm and fatally shot him. June 30, Clinton, Louisiana: A 12-year-old boy used a hunting rifle to defend his mother against an armed intruder who had forced his way into their home. Police said that after the intruder threatened the boy's mother during a struggle, the boy retrieved the rifle and fatally shot him.

As these stories show, law-abiding Americans often rely on their right to keep and bear arms to defend themselves, their livelihoods, and their communities.

Attacking the gun industry -- which overwhelmingly serves the legitimate function of facilitating peaceable citizens' exercise of their constitutional rights -- is not going to make the nation safer from gun-related violence.

Attacks on gun manufacturers, however, make it harder for Americans to protect themselves when the government can't or won't be there in time to help.

The post 11 Examples of Why Government Shouldn’t Go After Lawful Gun Industry appeared first on The Stream.