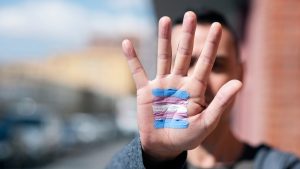 How many examples could one give to show what a sick world left-wing activists, the media and the Democrats -- the left’s political party -- have wrought? The number is equal to the number of policies they advocate.

There is no more obvious example than their position on the display of a penis in front of girls and women.

Exposing Oneself is a Fundamental Civil Right?

No issue -- with the possible exceptions of defunding police departments as murders increase and biological men competing in women’s sports -- better reveals the moral and rational decline of an individual or institution. If anyone you care about defends a person’s right to display their penis in front of a group of girls and women, my heart goes out to you. It is very painful to lose respect for a loved one.

Within the lifetime of even the youngest person reading this column, exposing the male organ to strangers, especially women and girls, was considered sick and criminal. Men who did it were arrested and charged with indecent exposure, and rightly so. In the span of a few years, thanks to the schools people still send their children to, and thanks to the media people still watch, listen to and read, exposing one’s penis is to be considered wholesome and not only legal but a fundamental civil right.

Claiming to be a Woman

A couple of weeks ago at a spa in Los Angeles, a biological man walked into a women’s changing area completely naked. Needless to say, the girls and women were shocked to see this naked man, but thanks to progressive politicians in California, if a man says he is a woman, this individual can go to any place heretofore reserved to women.

Women’s colleges, for example, must accept anyone who claims to be a woman. But to show how intellectually dishonest progressives and women’s colleges are, if a female student at a women’s college decides she is a man, she/he is allowed to remain a student there. Either they do not believe that a girl who transitions to a male is really a male or they no longer believe they are a women’s college.

A Los Angeles Times editorial defending the right of the biological man to expose his penis to girls and women illustrates the intellectual and moral state of the left.

The Intellectual and Moral State of the Left

Take, for example, this sentence from the editorial:

“There is no doubt that Wi Spa did the right thing in defending the right of a transgender customer to be nude in the women’s area, even though the sight of male-appearing genitalia discomfited at least one female customer, who complained at the front desk.”

But they don’t. A man who identifies as a woman yet retains male genitalia may have a legal right, but not a moral right, to display those genitalia in front of women.

A man who identifies as a man and exposes himself to a woman, let alone to a group of women and girls, is deemed sick and arrested. But, according to the left, a man who says he is a woman and does the exact same thing -- with the exact same disturbing effect on women, let alone girls -- is to be given universal support. In fact, however, this individual is the apotheosis of narcissism. And is still a man: As one woman pointed out to me, his engaging in such behavior is demonstrative proof that he is still a man (one with an exhibitionist streak). Women don’t expose themselves like that.

The State of America and the West

Meanwhile, members of ANTIFA, the closest thing America has to the Hitlerjugend (Hitler Youth), attacked the woman who led the demonstration against the Wi Spa.

Such is the state of America and the West in the year 2021.

When the right of a man -- regardless of whether he identifies as a woman -- to expose his penis to girls supersedes society’s obligation to protect girls’ innocence and most women’s sense of decency, we have reached a new low.

For those who believe that mankind inexorably heads in a moral direction, the left’s attacks on Western culture, Western norms, freedom of speech, objective truth and Judeo-Christian values should serve as a disturbing wake-up call.