The NEA Gets Behind CRT 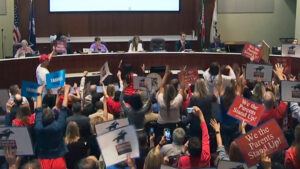 The nation's largest teachers' union, the misleadingly named National Education Association ("Education" should more accurately be replaced with "Indoctrination") came out against parents who are trying to get racist Critical Race Theory out of schools.

The NEA voted that it is "reasonable and appropriate" to use CRT in social studies classes (interestingly contradicting other leftists, who claim it's too "complex" for lower grades and deny it's being pushed in K-12 schools at all).

They also approved a plan to “publicize” CRT and dedicate a “team of staffers” to assist union members looking to “fight back against anti-CRT rhetoric” (i.e., they want to research the backgrounds of critics of CRT to try to smear and dox them).

The resolution also calls for the NEA to “join with Black Lives Matter at school and the Zinn Education Project to call for a rally this year on October 14 -- George Floyd's birthday -- as a national day of action to teach lessons about structural racism and oppression.” FYI: Howard Zinn was the self-described anarchist/socialist who wrote A People's History of the United States, the first major anti-American "revisionist" (false and propagandistic) history book which has infected America's schools for years.

The NEA also voted to back the "The 1619 Project," the latest false anti-American account of US history. It's so bad that even the World Socialist Web Site dismissed it as a load of careless, cherry-picked, racialist garbage that evinces "no familiarity with the massive body of work produced by generations of historians."

And this is what the largest teachers' union in America endorses pouring into your kids' noggins. That's why many people say that sending your kids to a public school these days is a form of child abuse.

On the plus side, since this is the same union that's fighting tooth and toenail to keep from reopening schools, maybe they'll still be refusing to indoctrinate kids even by October. By then, you will have been able to find a good school for your kids, or be home-schooling them, or have replaced your school board or pressured local leaders to replace this racist, Marxist brainwashing with actual education.

The post The NEA Gets Behind CRT appeared first on The Stream.