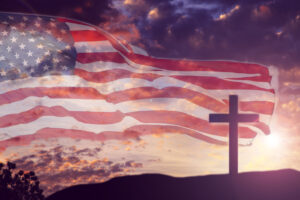 A victory for one of our own!

Christians Engaged President and Stream contributor Bunni Pounds, was baffled. "We just want to encourage more people to vote and participate in the political process. How can anyone be against that?"

The IRS's reasoning was a jaw-dropper: The biblical principles Christians Engaged pushes are "typically affiliated with the GOP."

Here's the actual wording from the IRS:

Specifically, you educate Christians on what the Bible says in areas where they can be instrumental, including the areas of sanctity of life, the definition of marriage, biblical justice, freedom of speech, defense, and borders and immigration, U.S. and Israel relations.

The Bible teachings are typically affiliated with the [Republican] party and candidates. This disqualifies you from exemption under IRS Section 501(c)(3).

So, because Democrats have abandoned freedom of speech, life, the traditional definition of marriage, securing our nation and support for Israel, Christian Engaged couldn't have tax-exempt status. Said the Biden IRS. (What an indictment of the Democratic party!)

Christians Engaged, with the legal help of First Liberty Institute, appealed. And they won. The IRS has reversed the decision.

The Reversal Comes After Pressure from House Republicans

The IRS didn’t reverse its decision on its own in a burst of reflection and clarity. The IRS’s sudden about-face comes just one week after House Republicans called on the Treasury Department's inspector general to investigate the denial.

“The Internal Revenue Service (IRS) appears to be engaging again in viewpoint discrimination,” GOP Reps. Jim Jordan, James Comer and Mike Johnson said in a June 30 letter to the Inspector General. “Over ten years after the IRS began targeting Tea Party groups, it seems the IRS could be up to its old tricks.”

Added the congressmen, "We must ensure the IRS is not reverting back to its targeting of conservative tax-exempt groups."

At least for this organization, on this day, the targeting was blocked.

In an email to friends and supporters, Bunni expressed her gratitude. "We are incredibly thankful to the IRS for doing the right thing, and we look forward to continuing our mission of educating more followers of Jesus to pray for our nation and to be civically engaged. When we stand up, our republic works for all Americans!"

She thanked those who prayed, adding, "This is a victory not only for Christians Engaged but for every Christian organization around America that teaches the Bible and cares about the future of our great nation."

Stream publisher James Robison praised Bunni and her efforts on behalf of all Americans.

I admire Bunni Pounds as much as anyone I know. She is truly a great American who wants the best for everybody.

"She knows if a nation forgets God, we will lose blessings, including the value of life, opportunity and freedom. May God multiply men and women like Bunni Pounds! We rejoice with her over this victory -- because it's a victory for freedom and everyone we love and care about.