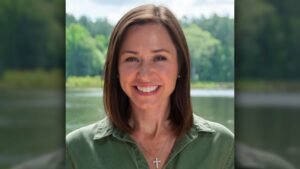 Britt, the former chief of staff to retiring Republican Sen. Richard Shelby, announced her campaign on June 8, reaching her record-breaking milestone in just 23 days, according to local outlet Yellowhammer News. She resigned from leading the Business Council of Alabama to run for Shelby's seat.

I will put Alabama First, deliver results for our state and never apologize for it. Because we don't just need a senator from Alabama, we need a Senator for Alabama. #BrittForAlabama #AlabamaFirst

Britt added that over 90% of donations came from within Alabama.

"It is clear that the people of our state know that we don't just need a senator from Alabama, we need a Senator for Alabama," she said Tuesday.

"Our Alabama First message is resonating strongly with hardworking families who want to protect our Christian conservative values and see real results -- not the same old tired, empty rhetoric that politicians have been selling them for decades," she said in a press release, reported Yellowhammer. "We're seeing and hearing this on the campaign trail every day, and these numbers certainly reinforce the incredible reception and momentum we're experiencing on the ground. I cannot thank our supporters enough for their enthusiasm and generosity."

Though Britt has posted record fundraising totals, she faces a crowded Republican primary to the race to succeed Shelby, who has held his seat since 1987. Other candidates include Trump-endorsed Rep. Mo Brooks and businesswoman Lydia Blanchard, who has largely self-funded her campaign, according to AL.com.

The post Alabama Senate Candidate Shatters Fundraising Records — and It’s Not Who Trump Endorsed appeared first on The Stream.