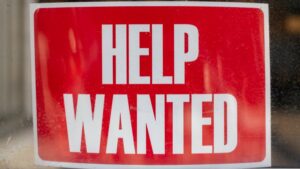 The number of Americans filing new unemployment claims dropped to 473,000 last week as the economy continues to slowly recover from the coronavirus pandemic, according to the Department of Labor.

"Employers are really clinging to their talent," Jay Denton, chief analyst for labor-analytics company ThinkWhy, told the WSJ. "There's a lot of demand there. We will start to see more hiring."

Thursday's figure represented the lowest level for initial jobless claims since March 14, 2020, when the Labor Department reported 256,000 new claims, according to the report.

Roughly 16.9 million Americans continue to collect unemployment benefits, according to the report.

The U.S. economy added just 266,000 jobs in April, far below projections, according to Labor Department report released last week. The White House and Democrats have said the economy is still recovering and that the dismal report proves the need for additional government spending.

Overall, the economy has added 1.5 million jobs since January, according to Department of Labor data. The economy grew 6.4% in the first quarter of 2021, another positive sign of economic recovery, the Commerce Department reported.

Republicans argued that the federal $300 weekly unemployment bonus implemented by Democrats' $1.9 trillion stimulus package has incentivized out-of-work Americans not to look for jobs. Job vacancies hit a record 8.1 million at the end of March, according to a Labor Department report released Tuesday.

Several Republican-majority states including South Carolina, Montana and Alabama have announced their withdrawal from the federal unemployment program.

"Among other factors, increased unemployment assistance, which was meant to be a short-term relief program during emergency related shutdowns, is now contributing to a labor shortage that is compromising the continuation of our economic recovery," Republican Alabama Gov. Kay Ivey said in a statement this week.

In April, consumer prices jumped 4.2%, the highest increase since September 2008, a sign that inflation is creeping up quickly.

Average coronavirus cases and deaths per million have declined since January, according to Centers for Disease Control and Prevention (CDC). On Wednesday, the U.S. reported 643 new coronavirus-related deaths and 34,291 new cases.

The U.S. has administered 265 million vaccinations, meaning 59% of the adult population has received at least one dose of a coronavirus vaccine, according to the CDC.